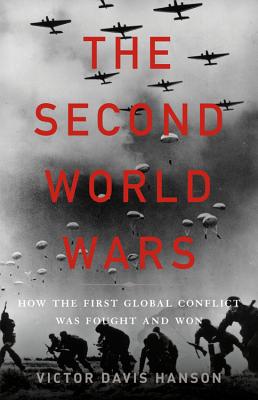 How the First Global Conflict Was Fought and Won

A definitive account of World War II by America's preeminent military historian.
World War II was the most lethal conflict in human history. Never before had a war been fought on so many diverse landscapes and in so many different ways, from rocket attacks in London to jungle fighting in Burma to armor strikes in Libya.

The Second World Wars examines how combat unfolded in the air, at sea, and on land to show how distinct conflicts among disparate combatants coalesced into one interconnected global war. Drawing on 3,000 years of military history, bestselling author Victor Davis Hanson argues that despite its novel industrial barbarity, neither the war's origins nor its geography were unusual. Nor was its ultimate outcome surprising. The Axis powers were well prepared to win limited border conflicts, but once they blundered into global war, they had no hope of victory.

Victor Davis Hanson is a senior fellow in military history at the Hoover Institution at Stanford University and a professor emeritus of classics at California State University, Fresno. He is the author of more than two dozen books, ranging in topics from ancient Greece to modern America, most recently the New York Times bestseller The Case for Trump. He lives in Selma, California.

Praise For The Second World Wars: How the First Global Conflict Was Fought and Won…

"The
Second World Wars
by Victor Davis Hanson is breathtakingly magisterial: How
can Mr. Hanson make so much we thought we knew so fresh and original?"—Karl Rove, Wall Street Journal

"An
extraordinary array of facts and statistics, [The Second
World Wars
] offers an account of the fatalism of war."—New Yorker

"The Second World Wars is an outstanding work of historical interpretation. It is impossible to do justice to such a magnificent book in a short review. Given the vast quantities of ink expended on accounts of this great conflict, one would think that there was not much more left to say. Hanson proves that this belief is wrong. His fresh examination of World War II cements his reputation as a military historian of the first order."—National Review

"Lively and proactive, full of the kind of novel perceptions that can make a familiar subject interesting again."—New York Times Book Review

"[The Second World Wars] is written in an energetic and engaging style. Mr. Hanson provides more than enough interesting and original points to make this book essential reading. One thing becomes increasingly clear: The complex of conflicts between 1937 and 1945, because of their unprecedented reach and their death blow to colonialism, brought world history together for the first time."—Wall Street Journal

"Hopefully, [The Second World Wars] will become required reading for students at professional military schools as an introduction to war in the industrial age as well as to students studying how the 20th century shaped who we are today."—Washington Times

"In his exposition of this thesis, displaying a depth of knowledge of the period that is often simply astounding, Hanson has written what I consider to be the most important single-volume explanation of World War II since Richard Overy's Why the Allies Won (1996)-that is, for a generation."—Andrew Roberts, Claremont Review of Books

"Even if you feel like you've read everything and then some about World War II, you will find a huge amount in [The Second World Wars] that is new, fascinating, and enlightening. And more than that, you'll find a way of thinking about how the lowliest practicalities and logistical challenges of war are connected to the highest reaches of geopolitics that will change how you think about both. This is what a great, enduring work of military history looks like."—Yuval Levin, National Review

"[The Second World Wars] is a brilliant and very original and readable work by a great military historian and contemporary commentator."—New Criterion

"As I struggle in my office to capture Hanson's analytical tour de force in review, I can see the shelf full of books on World War II that I've read over the decades. After reading Wars, I believe I have a firmer grasp of the big picture--very big picture indeed--of how this conflict began, the various tortuous paths it took, and how it resolved the way it did than after digesting all of these other volumes. Reviewers are sometimes over-quick to label a book essential. For readers who wish to fully understand World War II, this book is."—American Spectator

"Dr. Hanson has written another well-researched and fascinating book. [He] does an excellent job of placing World War II in the historical context of global conflict."—New York Journal of Books

"Victor Davis Hanson's history is thematic. The war is dissected into its constituent parts, allowing the historian to examine at length aspects of the conflict that would be given short shrift in a narrative account. What is remarkable is that despite the absence of a traditional storyline the reader's attention never flags. Indeed, I have learned more in a few days with this dog-eared [book] than I have in a lifetime of interest in World War II."—Washington Free Beacon

"Let me simply say this: prepare yourself to be astonished. The more you know about WWII, the greater will be your astonishment. The Second World Wars demonstrates once again that VDH is a constantly renewing American national treasure who continues to go from strength to strength."—Claremont Review of Books

"Hansen provides a concise, readable and well-researched volume on World War II. It is an excellent starting point for those who know nothing about World War II, and a fresh look at the war for those knowledgeable about it."—Galveston County's The Daily News

"[Hanson's] insights into the international reach of the conflict are very much worth reading, and in this book as in all his others, the reading momentum never flags."—Open Letters Monthly

"Hanson is a writer who crunches not only numbers but the text itself. He has a gift for brevity, exactness, and clarity. Invariably he brings the wisdom of a lifetime of scholarship, plus his natural intelligence, to bear on judgments about strategy, causes, leadership, and results. [The Second World Wars] is a fine book, rich in both facts and ideas. It is a triumph for an author/historian with a clear vision, the necessary imagination, and the intellect to explain the past to us on a vast canvas, with clarity, a sense of values, and common sense."—Omaha Dispatch

"[Hanson's] organizational approach allows him to isolate and highlight observations that may surprise even some well-read WWII enthusiasts."—Publishers Weekly

"The Second World Wars is a monumental, riveting, and illuminating reappraisal of the first - and hopefully the last - truly global conflict, full of exceptional insights from one of America's greatest living historians. Victor Davis Hanson's account provides an exceptional retrospective on the wars in which a staggering 60 million people perished before the Allies prevailed."—General David Petraeus (US Army, Ret.), former commander of the Surge in Iraq, US Central Command, and coalition forces in Afghanistan and former Director of the CIA

"The Second World Wars offers an incisive tale for our age of globalization. Yet it is rooted in timeless truths. That is no surprise because Victor Davis Hanson is our greatest historian of western warfare from its origins in ancient Greece. Nobody writes military history like Hanson."—Barry Strauss, author of The Death of Caesar: The Story of History's Greatest Assassination

"Victor Hanson's comprehensive account of World War II is a wonder. Where others have supplied a narrative, he provides analysis. He explores the war's origins; the role played in its conduct by airpower, sea power, infantry, tanks, artillery, industry, and generalship; and the reasons why the Allies won and the Axis lost. This is an eye-opener and a page-turner."—Paul A. Rahe, Hillsdale College, author of The Grand Strategy of Classical Sparta: The Persian Challenge

"I couldn't put it down. It is rare to encounter a view of the war from the multiple perspectives of the six powers, three on each side, who were the prime combatants, in the elemental theaters of sea and air and land. The analysis is excellent. The Second World Wars is a major work of historical narrative and deserves to meet readers receptive to its riches."—David Lehman, author of Sinatra's Century

"Victor Davis Hanson has delivered another masterpiece-this time a monumental history of World War II, surpassing all prior attempts at a comprehensive accounting of that cataclysm. Ranging from the deserts of North Africa to the islands of the Pacific, Hanson brings to bear a massive arsenal of insights to illuminate how strategy, culture, industry, and leadership shaped battlefield events and doomed the Axis empires."—Mark Moyar, author of Oppose Any Foe: The Rise of America's Special Operations Forces

"If you think there is nothing more to be said about World War II, then you haven't read Victor Davis Hanson's The Second World Wars. Hanson displays an encyclopedic knowledge of every aspect of the conflict, ranging from land to sea to air, and from grand strategy to infantry tactics, to analyze what happened and why. Page after page, he produces dazzling insights informed by his deep knowledge of military history going all the way back to ancient Greece. The Second World Wars is compulsively readable."—Max Boot, author of Invisible Armies, War Made New and The Savage Wars of Peace