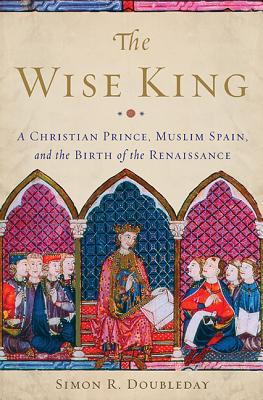 A Christian Prince, Muslim Spain, and the Birth of the Renaissance

An illuminating biography of Alfonso X, the 13th-century philosopher-king whose affinity for Islamic culture left an indelible mark on Western civilization

"If I had been present at the Creation," the thirteenth-century Spanish philosopher-king Alfonso X is said to have stated, "Many faults in the universe would have been avoided." Known as El Sabio, "the Wise," Alfonso was renowned by friends and enemies alike for his sparkling intellect and extraordinary cultural achievements. In The Wise King, celebrated historian Simon R. Doubleday traces the story of the king's life and times, leading us deep into his emotional world and showing how his intense admiration for Spain's rich Islamic culture paved the way for the European Renaissance.

In 1252, when Alfonso replaced his more militaristic father on the throne of Castile and LeÃ³the battle to reconquer Muslim territory on the Iberian Peninsula was raging fiercely. But even as he led his Christian soldiers onto the battlefield, Alfonso was seduced by the glories of Muslim Spain. His engagement with the Arabic-speaking culture of the South shaped his pursuit of astronomy, for which he was famed for centuries, and his profoundly humane vision of the world, which Dante, Petrarch, and later Italian humanists would inherit. A composer of lyric verses, and patron of works on board games, hunting, and the properties of stones, Alfonso is best known today for his Cantigas de Santa MarÃ­/i> (Songs of Holy Mary), which offer a remarkable window onto his world. His ongoing struggles as a king and as a man were distilled-in art, music, literature, and architecture-into something sublime that speaks to us powerfully across the centuries.

An intimate biography of the Spanish ruler in whom two cultures converged, The Wise King introduces readers to a Renaissance man before his time, whose creative energy in the face of personal turmoil and existential threats to his kingdom would transform the course of Western history.

Praise For The Wise King: A Christian Prince, Muslim Spain, and the Birth of the Renaissance…

"The Middle Ages have long been categorized as an infertile intermission between the classical Greek and Roman world and the Renaissance.... Doubleday (The Lara Family) here debunks the myth.... [He] convincingly reasons that Alfonso was the epitome of a renaissance man."—Library Journal

"In this insightful biography of Alfonso X of Castile and León (1221-1284), Doubleday...illuminates the complexity of society in 13th-century Spain and, through the figure of the king, 'exorcises the myth that medieval Europe was mired in a dark age.'"—Publishers Weekly

"Machiavelli may get all the press, but as Simon Doubleday shows in this fascinating work, the 13th-century Spanish king Alfonso X brought an altogether more enlightened approach to the task of leadership. Promoting culture and learning, moderating temper and greed, acting virtuously by example, even judiciously endorsing games and sex--these were the tasks that Alfonso assigned himself, even while he fulfilled the more traditional roles of warrior and defender of the faith. That he did all this not despite the very real proximity of a rival Islamic kingdom but precisely because of it is one of the most intriguing arguments of Doubleday's beautifully-written book. This political context will not seem entirely unfamiliar to modern readers, but neither, as these engaging pages show, should the forms of wise leadership that Alfonso preached and practiced."—Lisa Abend, Madrid correspondent, TIME magazine, and author of The Sorcerer's Apprentices

"Cosmopolitan, learned, and deeply-cultured, Alfonso is proof that brightness shone in parts of Europe during what later became popularly, if unfairly, known as the Dark Ages. His 13th-century preoccupations with manners, wisdom, friendship, music, sex, sport, greed, fear, and parenting are indeed a mirror of contemporary concerns. Few of us, however, have had the time--or the talent-- to think so deeply or write so eloquently about them. Doubleday's scholarly but accessible writing makes him the ideal guide and companion."—Giles Tremlett, Madrid correspondent, The Guardian and The Economist, and author of Catherine of Aragon and Ghosts of Spain

"Sex, Greed, Wisdom, Joy: In Simon Doubleday's deft treatment, we find the renowned medieval King Alfonso the Wise pondering the same themes that grip the modern imagination. Doubleday is a gifted writer who introduces readers to a turbulent era while inviting thoughtful reflection on our own day."—Chris Lowney, author of Heroic Leadership and A Vanished World

Simon R. Doubleday is Professor of History at Hofstra University, editor-in-chief of the Journal of Medieval Iberian Studies, and author of The Lara Family: Crown and Nobility in Medieval Spain. He received his BA from Cambridge University and his PhD in Medieval History from Harvard, and is the recipient of awards for Outstanding Scholarly Achievement from Hofstra and for teaching from the National Endowment for the Humanities.
Loading...
or support indie stores by buying on