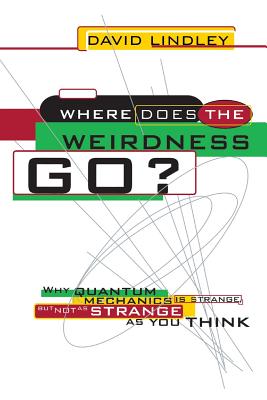 Where Does The Weirdness Go?

Why Quantum Mechanics Is Strange, But Not As Strange As You Think

Few revolutions in science have been more far-reaching -- but less understood -- than the quantum revolution in physics. Everyday experience cannot prepare us for the sub-atomic world, where quantum effects become all-important. Here, particles can look like waves, and vice versa; electrons seem to lose their identity and instead take on a shifting, unpredictable appearance that depends on how they are being observed; and a single photon may sometimes behave as if it could be in two places at once. In the world of quantum mechanics, uncertainty and ambiguity become not just unavoidable, but essential ingredients of science -- a development so disturbing that to Einstein "it was as if God were playing dice with the universe." And there is no one better able to explain the quantum revolution as it approaches the century mark than David Lindley. He brings the quantum revolution full circle, showing how the familiar and trustworthy reality of the world around us is actually a consequence of the ineffable uncertainty of the subatomic quantum world -- the world we can't see.

David Lindley, formerly a theoretical astrophysicist at Cambridge University in England and the Fermi National Accelerator Laboratory in Illinois, has been an editor of the journals Nature and Science and is currently Associate Editor of Science News, in Washington, D.C. He lives in Takoma Park, Maryland.
Loading...
or support indie stores by buying on