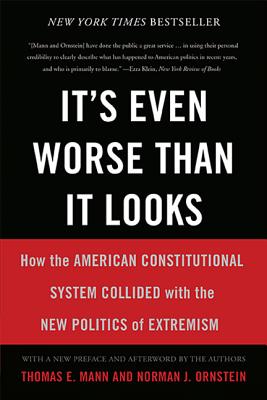 It's Even Worse Than It Looks

Hyperpartisanship is as old as American democracy. But now, acrimony is not confined to a moment; it's a permanent state of affairs and has seeped into every part of the political process. Identifying the overriding problems that have led Congress--and the United States--to the brink of institutional collapse, It's Even Worse Than It Looks profoundly altered the debate about why America's government has become so dysfunctional. Through a new preface and afterword, Thomas Mann and Norman Ornstein bring the story forward, examining the 2012 presidential campaign and exploring the prospects of a less dysfunctional government. As provocative and controversial as ever, It's Even Worse Than It Looks will continue to set the terms of our political debate in the years to come.