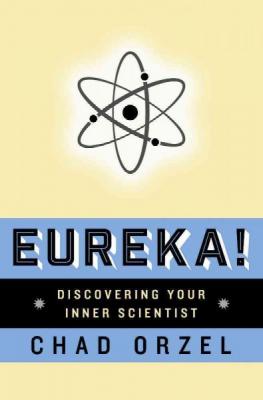 When it comes to science, too often people say "I just don't have the brains for it" -- and leave it at that. Why is science so intimidating, and why do people let themselves feel this way? What makes one person a scientist and another disinclined even to learn how to read graphs? The idea that scientists are people who wear lab coats and are somehow smarter than the rest of us is a common, yet dangerous, misconception that puts science on an intimidating pedestal. How did science become so divorced from everyday experience?

In Eureka, science popularizer Chad Orzel argues that even the people who are most forthright about hating science are doing science, often without even knowing it. Orzel shows that science is central to the human experience: every human can think like a scientist, and regularly does so in the course of everyday activities. The common misconception is that science is a body of (boring, abstract, often mathematical) facts. In truth, science is a process: Looking at the world, Thinking about what makes it work, Testing your mental model by comparing it to reality, and Telling others about your results -- all things that people do daily. By revealing the connection between the everyday activities that people do -- solving crossword puzzles, playing sports, or even watching mystery shows on television -- and the processes used to make great scientific discoveries, Eureka shows that this process is one everybody uses regularly, and something that anyone can do.

"Chad Orzel entertainingly argues that we are all scientists, with the innate ability to discover and create."—New Scientist

"Chad Orzel is absolutely right: everyone has a scientist inside
them, eager to burst out and look at the world in a new way. This book provides
great examples that will inspire you to let your inner scientist free."—Sean Carroll, theoretical physicist at Caltech and author of TheParticle at the End of the Universe

"A good reminder that we are all capable of looking at the world scientifically and working things out, and we should all have the confidence to do that a bit more often."—BBC Focus

"Many people are curious about the natural world, but few consider themselves scientists. Using an engaging array of examples of scientific discovery--some recent, others drawn from history--Chad Orzel takes readers on a wonderful tour of how scientists think."—David Kaiser, Germeshausen Professor of the History of Science, MIT andauthor of How the Hippies Saved Physics: Science, Counterculture, and theQuantum Revival

"I know, I know, you think you're just not smart enough to be a scientist. Chad Orzel might convince you otherwise with Eureka. Drawing on basketball, stamp collecting, Angry Birds, Iron Chef, and Antiques Roadshow among his many colorful examples, he ably demonstrates that science is not a rarefied alien endeavor performed solely by those with genius IQs. It's a process, and a way of thinking about the world available to all. Surprise! You're probably committing acts of science every day."—Jennifer Ouellette, author of The Calculus Diaries and Me, Myself and Why

"Drawing on a wide variety of examples and stories, many from sports and pop culture, Orzel writes in a crisp, clear, and entertaining style."—Winnipeg Free Press

"In writing that is welcoming but not overly bouncy, persuasive in a careful way but also enticing, Orzel reveals the 'process of looking at the world, figuring out how things work, testing that knowledge, and sharing it with others.'"—Kirkus Reviews

"This fun, diverse, and accessible look at how science works will convert even the biggest science phobe."—Publishers Weekly

Chad Orzel received his BA in physics from Williams College, his Ph.D. in chemical physics from the University of Maryland, and his postdoctorate from Yale University. He maintains a regular blog, Uncertain Principles, and is author of How to Teach Physics to Your Dog. He is currently a professor at Union College in Schenectady, New York. He lives near campus with his wife, their daughter, and, of course, Emmy.
Loading...
or
Not Currently Available for Direct Purchase