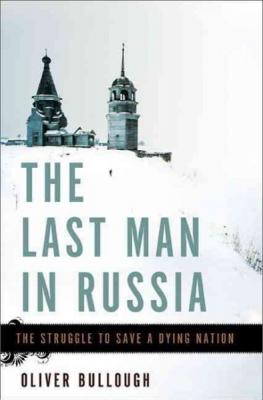 The Last Man in Russia

The Struggle to Save a Dying Nation

Russia is dying from within. Oligarchs and oil barons may still dominate international news coverage, but their prosperity masks a deep-rooted demographic tragedy. Faced with staggering population decline—and near-certain economic collapse—driven by toxic levels of alcohol abuse, Russia is also battling a deeper sickness: a spiritual one, born out of the country’s long totalitarian experiment.

In The Last Man in Russia, award-winning journalist Oliver Bullough uses the tale of a lone priest to give life to this national crisis. Father Dmitry Dudko, a dissident Orthodox Christian, was thrown into a Stalinist labor camp for writing poetry. Undaunted, on his release in the mid-1950s he began to preach to congregations across Russia with little concern for his own safety. At a time when the Soviet government denied its subjects the prospect of advancement, and turned friend against friend and brother against brother, Dudko urged his followers to cling to hope. He maintained a circle of sacred trust at the heart of one of history’s most deceitful systems. But as Bullough reveals, this courageous group of believers was eventually shattered by a terrible act of betrayal—one that exposes the full extent of the Communist tragedy. Still, Dudko’s dream endures. Although most Russians have forgotten the man himself, the embers of hope that survived the darkness are once more beginning to burn.

Leading readers from a churchyard in Moscow to the snow-blanketed ghost towns of rural Russia, and from the forgotten graves of Stalin’s victims to a rock festival in an old gulag camp, The Last Man in Russia is at once a travelogue, a sociological study, a biography, and a cri de coeur for a dying nation—one that, Bullough shows, might yet be saved.

Oliver Bullough studied modern history at Oxford University before moving to Russia in 1999. He lived in St. Petersburg, Bishkek and Moscow over the next seven years, working as a journalist for local magazines and newspapers and then for Reuters news agency. He reported from all over Russia, Georgia, Ukraine and Kyrgyzstan, but liked nothing more than to work among the peoples and mountains of the North Caucasus. He moved back to Britain in 2006, and now lives in Hackney, East London.
Loading...
or support indie stores by buying on