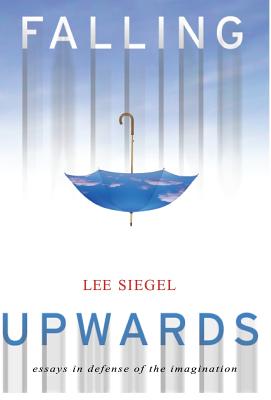 Essays in Defense of the Imagination

Sex and the City, Saul Bellow, Eyes Wide Shut, Dante and the American self, Barbara Kingsolver, acting in Hollywood, Soviet painting in Soho, Angels in America, Jane Austen in the present, J.K. Rowling -- nothing escapes Lee Siegel's incandescent eye. Siegel possesses an intellectual range and independent perspective unmatched by his peers, and Falling Upwards brings together the best of his essays, all of them rich with the trades mark wit and intelligence that have won him many friends and a few enemies. In these essential writings, Siegel deftly uses the occasion of a book, film, painting, or television show not merely to appraise it, but to make sense of life in a way that is more defiant of impoverished cultural "norms" than most contemporary artistic expression. Guided by the belief that a calculating self-interest in art-making diminishes the prospects for the imagination in life, Siegel celebrates authentic sensibilities and lambasts manufactured sentiments. With uncanny insight, yet also with incomparable logic and analytical rigor, he has invented a new idiom in which the language of criticism embodies the playful, creative, synthesizing power that has been largely abdicated by the arts in our time. In writing about works of culture, Siegel has created a standard by which to judge them.

Lee Siegel is a renowned critic and essayist whose writing appears in Harper's, the New Republic, Time, the Atlantic Monthly, the New Yorker, among other publications. He received the 2002 National Magazine Award for Reviews and Criticism. He is the author of Falling Upwards. Siegel is a senior editor at the New Republic. He lives with his wife and child in New York City.
Loading...
or
Not Currently Available for Direct Purchase