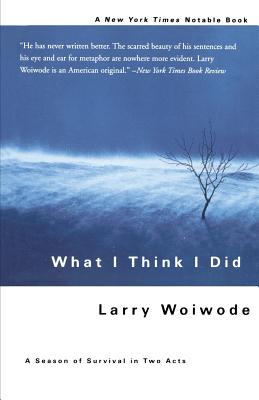 What I Think I Did

A Season Of Survival In Two Acts

In What I Think I Did, Larry Woiwode does two things at once: he survives the winter of 1996, the worst in North Dakota's history, and tells the story of his beginnings as a writer, especially the early days at The New Yorker leading up to the publication of his first book, What I'm Going to Do, I Think."Act One" revolves around the purchase, installation, and feeding of a giant wood-burning furnace to heat Woiwode's farm through that winter's record snow and cold. These acts form a central metaphor for exploring the sources of his writer's craft and for pulling together the threads of his boyhood and family life. "Act Two" recounts his university life and early New York days, his beginning a writing career, and his friendship with the young Robert DeNiro. The material on the late William Maxwell, of The New Yorker, is riveting. More than almost any other writer, Woiwode has the capacity to astound with his words. In this memoir, he is at the top of his form.

Larry Wiowode is the poet laureate of North Dakota. His fiction has appeared in the Atlantic Monthly, Esquire, Harper's, the New Yorker, and many other publications. His first novel, What I'm Going To Do, I Think, received the William Faulkner Foundation Award; his second, Beyond the Bedroom Wall, was a finalist for both the National Book Award and the National Book Critics Circle Award. He lives in western North Dakota with his wife.
Loading...
or support indie stores by buying on