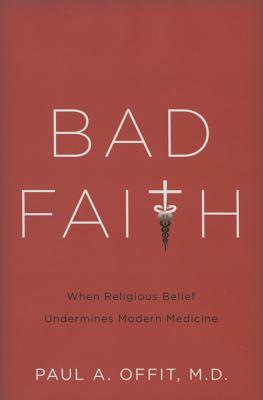 In recent years, there have been major outbreaks of whooping cough among children in California, mumps in New York, and measles in Ohio's Amish country -- despite the fact that these are all vaccine-preventable diseases. Although America is the most medically advanced place in the world, many people disregard modern medicine in favor of using their faith to fight life threatening illnesses. Christian Scientists pray for healing instead of going to the doctor, Jehovah's Witnesses refuse blood transfusions, and ultra-Orthodox Jewish mohels spread herpes by using a primitive ritual to clean the wound. Tragically, children suffer and die every year from treatable diseases, and in most states it is legal for parents to deny their children care for religious reasons. In twenty-first century America, how could this be happening?

In Bad Faith, acclaimed physician and author Dr. Paul Offit gives readers a never-before-seen look into the minds of those who choose to medically martyr themselves, or their children, in the name of religion. Offit chronicles the stories of these faithful and their children, whose devastating experiences highlight the tangled relationship between religion and medicine in America. Religious or not, this issue reaches everyone -- whether you are seeking treatment at a Catholic hospital or trying to keep your kids safe from diseases spread by their unvaccinated peers.

Replete with vivid storytelling and complex, compelling characters, Bad Faith makes a strenuous case that denying medicine to children in the name of religion isn't't just unwise and immoral, but a rejection of the very best aspects of what belief itself has to offer.

“An important and fascinating book. For more than a decade, Paul Offit has been relentless in his exposure of forces that can undermine the life-saving advances of modern medicine. His latest effort, Bad Faith, combines gripping storytelling with an insider's knowledge. Offit offers a compassionate and clear-headed take on religion that puts children's well-being where it should be: at the center of the discussion. A must-read for anyone interested in the challenges of public health in the twenty-first century.”
—Seth Mnookin, Associate Director of The Graduate Program in Science Writing, MIT, and author of The Panic Virus: The True Story Behind the Vaccine-Autism Controversy

“Honest and fair, Bad Faith fails to leave any stone unturned—whether it be why faith-healing groups continue to promote these practices or roots of the religious theories against modern science. Regardless of your faith, this is a fabulous book that's well worth the read.”
—Philadelphia Inquirer

“Using actual case histories to illustrate the needless suffering and deaths that occur as a result of these methods, Offit masterfully points out that the denial of medicine in the name of religion actually rejects the basic teaching of religious faith: relieving suffering, providing hope, and treating others as one would wish to be treated. An excellent book with an important message that belongs in all library collections.
—Library Journal (starred review)

“A clear-eyed, sometimes terrifying look at how religious belief has been used, both historically and in contemporary contexts, to undermine modern medicine.”
—Kirkus Reviews (feature interview)

“A must read for anyone who seeks to understand the tangled relationship between religion and medicine in America.”
—Shot of Prevention

“This book should be read by anyone who deals with children, parents, medicine, or religion…Read the book. Make up your own mind about the religious aspect of it. But get the kids to the doctor.”
—Skeptic Ink

“No physician today writes with more passion and courage about the impact of quackery, zealotry, hucksterism, and bad science upon the health of our children than Paul Offit. Bad Faith is another superb example, exposing the dangers of religious extremism in denying basic and life-saving medical care to the most vulnerable among us. This is no screed against religion, far from it. Deeply moving, elegantly written, Bad Faith brilliantly exposes the harm done by belief systems gone awry.”
—David Oshinsky, winner of the Pulitzer Prize for Polio: An American Story and Director, Division of Medical Humanities, New York University Medical School

“The medical system may function, in many ways, like an organized religion, but Paul Offit is not asking us to abandon God for doctors. Nor is he arguing that faith is bad. His premise here is that both medicine and religion, at their best, hold human life sacred.”
—Eula Biss, author of On Immunity: An Inoculation

“Paul Offit…is one of the most courageous and sober voices arguing to protect children from exemptions made by their parents.”
—New York Review of Books

“Offit is unflinching in his examination of the lethal costs of belief taken to irrational extremes.”
—Publishers Weekly

“A thought-provoking discussion of the conflict between society's right to protect all children and the constitutional guarantee of religious freedom.”
—Kirkus Reviews

“Offit makes a convincing case that these actions are contrary to the very best aspects inherent in religious beliefs.”
—Muses & Visionaries

“This is a brave examination of the unhappy borderlands where religious beliefs battle—often tragically—against the imperatives of medical care and public health; packed with fascinating stories of the most tortured meetings of medical practice and religious practice, but also allowing glimpses of good faith and medical hope.”
—Perri Klass, M.D., Director, Arthur L. Carter Institute of Journalism, New York University and author of Treatment Kind and Fair

One of Library Journal's “Best Core Nonfiction” books of 2015

“Gripping.... With Bad Faith, perhaps even more than with his previous books, Dr. Offit is probably preaching only to the choir. That doesn't make his message any less important.”
—New York Times, Science Times

“Offit must be commended for the detachment and gentleness with which he treats his subjects, who comprise both the faith healers and the parents of children who have died because they failed to receive life-saving medical procedures...He treads a careful path through exposing the wretchedness caused by religion, while not simply applauding secularism as the remedy.”
—Times Higher Education Supplement

“But even allowing for the positive role of religion in aiding the afflicted, one can only hope that...books like Bad Faith will eventually bring about legislation that eliminates religious exemption for medical neglect of a child.”
—New York Times Book Review

Paul A. Offit, MD, is a Professor of Pediatrics in the Division of Infectious Diseases at the University of Pennsylvania School of Medicine and Director of the Vaccine Education Center at the Children's Hospital of Philadelphia. The author of several books, he lives in Bala Cynwyd, Pennsylvania.
Loading...
or
Not Currently Available for Direct Purchase