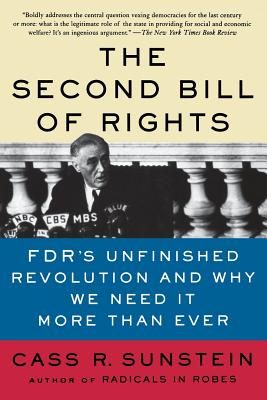 The Second Bill of Rights

FDR's Unfinished Revolution -- And Why We Need It More Than Ever

In 1944, Franklin Delano Roosevelt gave a State of the Union Address that was arguably the greatest political speech of the twentieth century. In it, Roosevelt grappled with the definition of security in a democracy, concluding that "unless there is security here at home, there cannot be lasting peace in the world." To help ensure that security, he proposed a "Second Bill of Rights" -- economic rights that he saw as necessary to political freedom. Many of the great legislative achievements of the past sixty years stem from Roosevelt's vision. Using this speech as a launching point, Cass R. Sunstein shows how these rights are vital to the continuing security of our nation. This is an ambitious, sweeping book that argues for a new vision of FDR, of constitutional history, and our current political scene.

Cass R. Sunstein is currently the Robert Walmsley University Professor at Harvard. From 2009 to 2012, he was Administrator of the White House Office of Information and Regulatory Affairs. From 2013 to 2014, he served on President Obama's Review Group on Intelligence and Communications Technologies. From 2016 to 2017, he served on the Defense Innovation Board of the US Department of Defense. Sunstein is author of many articles and books, including two New York Times bestsellers: The World According to Star Wars and Nudge (with Richard H. Thaler).

His other books include Republic.com, Risk and Reason, Why Societies Need Dissent, The Second Bill of Rights, Conspiracy Theories and Other Dangerous Ideas, The Ethics of Influence, and Can It Happen Here? Authoritarianism in America. He lives in Cambridge, Massachusetts.
@casssunstein
Loading...
or support indie stores by buying on