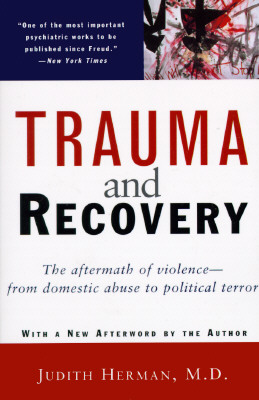 When "Trauma and Recovery" was first published in 1992, it was hailed as a groundbreaking work. In the intervening years, Herman's volume has changed the way we think about and treat traumatic events and trauma victims. In a new afterword, Herman chronicles the incredible response the book has elicited and explains how the issues surrounding the topic have shifted within the clinical community and the culture at large."Trauma and Recovery" brings a new level of understanding to a set of problems usually considered individually. Herman draws on her own cutting-edge research in domestic violence as well as on the vast literature of combat veterans and victims of political terror, to show the parallels between private terrors such as rape and public traumas such as terrorism. The book puts individual experience in a broader political frame, arguing that psychological trauma can be understood only in a social context. Meticulously documented and frequently using the victims own words as well as those from classic literary works and prison diaries, "Trauma and Recovery" is a powerful work that will continue to profoundly impact our thinking.

Judith Herman, M.D., one of this country's leading experts on trauma and abuse, is associate clinical professor of psychiatry at the Harvard Medical School, and director of training at the Victims of Violence Program at Cambridge Hospital. She is also a founding member of the Women's Mental Health Collective in Massachusetts.
Loading...
or
Not Currently Available for Direct Purchase