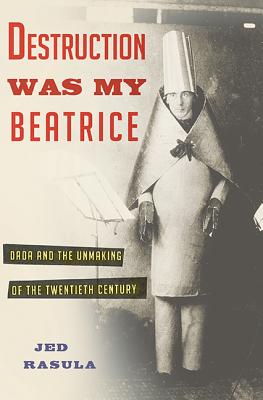 Destruction Was My Beatrice

Dada and the Unmaking of the Twentieth Century

In 1916, as World War I raged around them, a group of bohemians gathered at a small cabaret in Zurich, Switzerland. After decorating the walls with art by Picasso and other avant-garde artists, they embarked on a series of extravagant performances. Three readers simultaneously recited a poem in three languages; a monocle-wearing teenager performed a spell from New Zealand; another young man sneered at the audience, snapping a whip as he intoned his “Fantastic Prayers.” One of the artists called these sessions “both buffoonery and a requiem mass.” Soon they would have a more evocative name: Dada.

In Destruction Was My Beatrice, modernist scholar Jed Rasula presents the first narrative history of Dada, showing how this little-understood artistic phenomenon laid the foundation for culture as we know it today. Although the venue where Dada was born closed after only four months and its acolytes scattered, the idea of Dada quickly spread to New York, where it influenced artists like Marcel Duchamp and Man Ray; to Berlin, where it inspired painters George Grosz and Hannah Höch; and to Paris, where it dethroned previous avant-garde movements like Fauvism and Cubism while inspiring early Surrealists like André Breton, Louis Aragon, and Paul éluard. The long tail of Dadaism, Rasula shows, can be traced even further, to artists as diverse as William S. Burroughs, Robert Rauschenberg, Marshall McLuhan, the Beatles, Monty Python, David Byrne, and Jean-Michel Basquiat, all of whom—along with untold others—owe a debt to the bizarre wartime escapades of the Dada vanguard.

A globe-spanning narrative that resurrects some of the 20th century’s most influential artistic figures, Destruction Was My Beatrice describes how Dada burst upon the world in the midst of total war—and how the effects of this explosion are still reverberating today.

Jed Rasula is the Helen S. Lanier Distinguished Professor of English at the University of Georgia. The author of several scholarly works on literature and modernism, as well as two books of poetry, he lives in Athens, Georgia.
Loading...
or
Not Currently Available for Direct Purchase