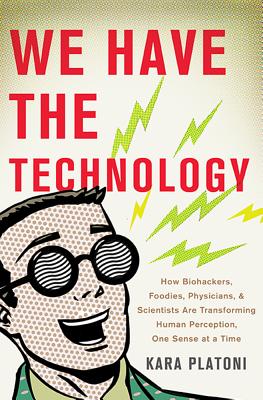 We Have the Technology

How Biohackers, Foodies, Physicians, and Scientists Are Transforming Human Perception, One Sense at a Time

How do we know what's real? That's not a trick question: sensory science is increasingly finding that we don't perceive reality: we create it through perception. In We Have the Technology, science writer Kara Platoni guides us through the latest developments in the science of sensory perception.

We Have the Technology introduces us to researchers who are changing the way we experience the world, whether creating scents that stimulate the memories of Alzheimer's patients, constructing virtual limbs that approximate a sense of touch, or building augmented reality labs that prepare soldiers for the battlefield. These diverse investigations not only explain previously elusive aspects of human experience, but offer tantalizing glimpses into a future when we can expand, control, and enhance our senses as never before.

A fascinating tour of human capability and scientific ingenuity, We Have the Technology offers essential insights into the nature and possibilities of human experience.

Praise For We Have the Technology: How Biohackers, Foodies, Physicians, and Scientists Are Transforming Human Perception, One Sense at a Time…

"[A] fascinating, often mind-boggling report on the fast-growing world of sensory science.... Sometimes glowingly optimistic, and sometimes unnerving, Platoni's overview previews a fast-approaching future of widespread sensory manipulation that demonstrates humankind is truly 'on the cusp of tinkering with its own evolution.'"—Booklist

"Eschewing both the glib hyperbole of techno-futurists and the finger-wagging of neo-Luddites, Platoni takes her notebook on a whistle-stop tour of sensory pioneers: AI developers, VR engineers, pain analysts, flavor enhancers, and even a few people who really are making the world a better place. Her focus on the senses raises smart questions about the pliable boundaries of human perception and the very real limits of technology--at least in primitive 2015."—New York Magazine, 7 Books You Need to Read This December

"The cutting edge takes on literal meaning in We Have the Technology, as Kara Platoni introduces us to the biohackers, surgeons, perfumers, chefs, and patients pushing the boundaries of reality by inserting perception-altering technologies inside their bodies. Deeply reported and deftly told, We Have the Technology draws back the curtain on a brave new world in which being a hacker means hacking oneself."—Joshua Davis, author of Spare Parts: Four Undocumented Teenagers, One Ugly Robot, and the Battle for the American Dream

Washington Post
“[We Have the Technology is a] scrupulously researched…thought-provoking book…A whirlwind tour of the senses and the ways technology may or may not enhance them through methods both fantastic and mundane…Platoni is a wonderful explicator of technology who weaves memorable and vivid metaphors to illustrate difficult concepts.”

Bay Area News Group, San Jose Mercury News, Contra Costa Times, and Oakland Tribune
“Kara Platoni melds complex concepts of biotech and human sensory enhancement in her new book, We Have the Technology…it shows us just how far modern technology has come -- and how wild and crazy it's going to get.”

Shelf Awareness for Readers newsletter
“[We Have the Technology is] an examination of how the creative world of sensory science is changing our understanding and perceptions of reality.”

Publishers Weekly, starred review
“[An] enthusiastic review of research into human senses and ways they might be improved.... [W]holly engrossing.... This is a superb account of human perception and the first, clunky but potentially breathtaking efforts to expand it.”

"Consistently fascinating, witty, and candid.... Engrossing techno-science delivered with gusto and sure to reach a varied audience."—Kirkus

"All readers will find something in this journalistic text that doesn't shy away from tough issues such as privacy and trauma."—Library Journal

"With her rich reporting and narrative writing, Platoni provides readers with an accessible and engaging firsthand account of the inventions that are likely to shape science, technology, and human perception for many years to come."—East Bay Express

"Platoni is a good match for this fascinating, sometimes fraught subject. She's an industrious gatherer of facts and anecdotes. She has a talent for explaining complex ideas in clear language. And in this book, her first, she's crafted a thought-provoking group portrait of the innovative thinkers who, in ways subtle and not so, are reimagining what the brain and the body can do.... She's the antithesis of an armchair reporter."—San Francisco Chronicle

"[We Have the Technology is a] scrupulously researched…thought-provoking book.... A whirlwind tour of the senses and the ways technology may or may not enhance them through methods both fantastic and mundane.... Platoni is a wonderful explicator of technology who weaves memorable and vivid metaphors to illustrate difficult concepts."—Washington Post

"[An] enthusiastic review of research into human senses and ways they might be improved.... [W]holly engrossing.... This is a superb account of human perception and the first, clunky but potentially breathtaking efforts to expand it."—Publishers Weekly, starred review

Award-winning journalist Kara Platoni has a master's degree from UC Berkeley's Graduate School of Journalism. She lives in Oakland, California.
Loading...
or
Not Currently Available for Direct Purchase