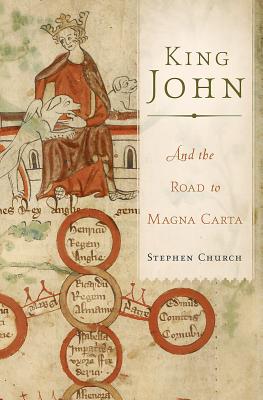 And the Road to Magna Carta

From a renowned medieval historian comes a new biography of King John, the infamous English king whose reign led to the establishment of the Magna Carta and the birth of constitutional democracy

King John (1166-1216) has long been seen as the epitome of bad kings. The son of the most charismatic couple of the middle ages, Henry II and Eleanor of Aquitaine, and younger brother of the heroic crusader king, Richard the Lionheart, John lived much of his life in the shadow of his family. When in 1199 he became ruler of his family's lands in England and France, John proved unequal to the task of keeping them together. Early in his reign he lost much of his continental possessions, and over the next decade would come perilously close to losing his English kingdom, too.

In King John, medieval historian Stephen Church argues that John's reign, for all its failings, would prove to be a crucial turning point in English history. Though he was a masterful political manipulator, John's traditional ideas of unchecked sovereign power were becoming increasingly unpopular among his subjects, resulting in frequent confrontations. Nor was he willing to tolerate any challenges to his authority. For six long years, John and the pope struggled over the appointment of the Archbishop of Canterbury, a clash that led to the king's excommunication.

As king of England, John taxed his people heavily to fund his futile attempt to reconquer the lands lost to the king of France. The cost to his people of this failure was great, but it was greater still for John. In 1215, his subjects rose in rebellion against their king and forced upon him a new constitution by which he was to rule. The principles underlying this constitution -- enshrined in the terms of Magna Carta -- would go on to shape democratic constitutions across the globe, including our own.

In this authoritative biography, Church describes how it was that a king famous for his misrule gave rise to Magna Carta, the blueprint for good governance.

Stephen Church is a professor of medieval history at the University of East Anglia and the author of The Household Knights of King John. He lives in Norwich, England.

Praise For King John: And the Road to Magna Carta…

"Church is a scholarly and readable authority who has devoted his career to King John's reign. He picks his way through the intrigues at court, clarifying waters muddied by patchy, often contradictory sources, and acts as an important corrective to the views of 'unconvincing' chroniclers, such as Roger of Wendover."—Telegraph (UK)

"Magna Carta, the foundation stone of constitutional government in the English-speaking world, passed its 800th anniversary this year. Church explains with exemplary clarity how the charter emerged from the turmoil of King John's reign."
—Financial Times

"A thoughtful and suggestive book, instructive for anyone interested in comparative government and essential for students of early medieval England and France."—Weekly Standard

"A fair and rounded picture of the king and his reign."—Spectator (UK)

"Church presents an analysis of a king besieged by traditions, his French neighbors, and his own family. We learn to appreciate the circumstances that caused him to act as he did, but we also come to appreciate that this king's actions set the stage for American constitutional government."—Roanoke Times

"Working from the primary sources of King John's life and times, Church approaches each major event in the reign from the even-keel perspective of the moment those events were happening, to the extent that such moments can be known... it works surprisingly well."
—Open Letters Monthly

"Church plumbs historical documents, such letters and treaties to recreate the up-and-down life of John. Luckily, like all rulers, John's reign had a bureaucracy, and bureaucracies run on paper. The portrait of the king is richer for the minutiae Church has mined from archives."—McClatchy

"Church dramatically relates the tragic twists of the king's fall in this story of power gone awry, with echoes that resonate in the present."—Publishers Weekly

"Highly recommended for anyone interested in medieval history or history in general."—
Library Journal

"In a biography that ties together the year 1215, Magna Carta, and 'wicked' King John, Stephen Church vividly explains the dawn of democracy."—Robert Lacey, co-author of The Year 1000: What Life Was Like at the Turn of the First Millennium--An Englishman's World

"Stephen Church has written a romp through King John's life, full of surprising and intriguing details--even though John ends up as 'a catastrophic failure.'"—Terry Jones, director of Monty Python and the Holy Grail, Monty Python's Life of Brian, and Monty Python's The Meaning of Life, and author of Terry Jones' Medieval Lives and Who Murdered Chaucer: A Medieval History

"Riveting. A refreshingly multi-faceted look at the man who, inadvertently, gave us the Magna Carta, still a cornerstone of our democracy. Stephen Church's achievement is to look behind the baddie of many a Robin Hood story and find a ruler who didn't know he'd go down as the worst monarch in British history."—Sarah Gristwood, author of Blood Sisters: The Women Behind the Wars of the Roses
or
Not Currently Available for Direct Purchase
Copyright © 2020 American Booksellers Association