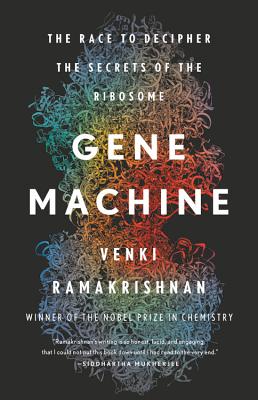 The Race to Decipher the Secrets of the Ribosome

"Ramakrishnan's writing is so honest, lucid and engaging that I could not put this book down until I had read to the very end." -- Siddhartha Mukherjee, author of The Emperor of All Maladies and The Gene

Everyone has heard of DNA. But by itself, DNA is just an inert blueprint for life. It is the ribosome -- an enormous molecular machine made up of a million atoms -- that makes DNA come to life, turning our genetic code into proteins and therefore into us. Gene Machine is an insider account of the race for the structure of the ribosome, a fundamental discovery that both advances our knowledge of all life and could lead to the development of better antibiotics against life-threatening diseases. But this is also a human story of Ramakrishnan's unlikely journey, from his first fumbling experiments in a biology lab to being the dark horse in a fierce competition with some of the world's best scientists. In the end, Gene Machine is a frank insider's account of the pursuit of high-stakes science.

Praise For Gene Machine: The Race to Decipher the Secrets of the Ribosome…

"It is [Ramakrishnan's] full embrace of the role of the antihero that makes Gene Machine so much fun to read and also serves as a reminder to us all of the beating human heart that lies at the center of every advance in science."—Wall Street Journal

"An engaging and witty memoir... This profoundly human story is written with honesty and humility... This lucid and highly readable account will be enjoyed by students in any of the sciences, by those interested in the history of science, or who love reading memoirs. But really, I think that anyone who is captivated by an absorbing story well told will find much to appreciate in this fascinating book."—Forbes

"In Gene Machine, [Ramakrishnan] thoughtfully embeds his trajectory in a wider meditation on how scientists make the decisions that lead to success or failure--and on how they struggle to solve complex problems... anyone who wants to know how modern science really works should read it. It's all here: the ambition, jealousy and factionalism--as well as the heroic late nights, crippling anxiety and disastrous mistakes--that underlie the apparently serene and objective surface represented by the published record."—Nature

"An enchanting and invigorating work, Gene Machine casts a many-angled light on the world of science, the nature of discovery, and on one of the deepest mysteries of twentieth-century biology. Ramakrishnan, one of the key players in deciphering the molecular basis of protein translation, gives us both a rollicking scientific story and a profoundly human tale. In the tradition of The Double Helix, Gene Machine does not hesitate to highlight the process by which science advances: moving through fits and starts, often underscored by deep rivalries and contests, occasionally pitching towards error and misconception, but ultimately advancing towards profound and powerful truths. An outsider to the world of ribosome biology--an Indian immigrant, a physicist by training--Ramakrishnan retains his 'outsider's' vision throughout the text, reminding us about the corrosive nature of scientific prizes, and the intensity of competition that drives researchers (both ideas, I suspect, will have a munificent effect on our current scientific culture). Ramakrishnan's writing is so honest, lucid and engaging that I could not put this book down until I had read to the very end."—Siddhartha Mukherjee

"If someone had told me that one of the most witty and enthralling books I'd read this year would be on the quest to understand ribosomes, I believe I would have laughed in his face, but I would have been quite wrong. Gene Machine is beyond superb." —Bill Bryson

"The ribosome, a structure of astonishing complexity, 'lies at the crossroads of life' and Venki Ramakrishnan played a key role in revealing its biological mysteries. His superb account lays out the science with great lucidity, but he also grants us the human face of science--the hard work and brilliant insights, of course, but also the role of luck, of personalities, jealousy, money, the roulette of major awards, and the further rewards heaped upon the fortunate. Science, in his glorious telling, becomes 'a play, with good and bad characters.' Competition and collaboration can appear inseparable, crucial figures get overlooked. It's a wonderful book and a great corrective to the notion of science as dispassionate, untainted objectivity."—Ian McEwan

"The ribosome is the central processor that decodes the universal machine-code of life, and the history of its unravelling is on a par with that of DNA itself. You could think of Venki Ramakrishnan as a sort of 'nice Jim Watson.' His meticulously detailed and generous memoir has the same disarming frankness as The Double Helix. His personal honesty about the competitive ambition that drove him is tempered by his deeply thoughtful reflections on the potentially corrupting effect of big prizes. Gene Machine will be read and re-read as an important document in the history of science."—Richard Dawkins

"Gene Machine is a must-read for anyone interested in a glimpse of the messy business of how science happens."—Times (UK)

"Enlightening... one can't help celebrating with Ramakrishnan when, near his story's conclusion, the call from Stockholm arrives."—Publishers Weekly

"An enlightening and enjoyable picture of the human side of scientific research."—New York Journal of Books

"A skillful memoir... An entertaining account of a peripatetic career, academic infighting, and the colorful, charismatic, or eccentric mentors, colleagues, and competitors the author encountered as well as an often cynical view of the scientific establishment."—Kirkus Reviews

"Discovering the structure of the ribosome was a truly incredible moment in the history of humankind: this intricate, microscopic machine that lies at the heart of all life, made mostly of RNA, that mysterious material that pre-dates both DNA and protein. As its shape and moving parts came gradually into focus through ingenious applications of crystallography, it is extraordinary to think that this is a device vital to all life, yet which no living thing has seen or understood till now. In this detective story of a book, told with smiles and subtlety, Venki Ramakrishnan relates how he, an immigrant from India, managed to assemble the people, the ideas and the tools to achieve this remarkable feat, in collaboration and (sometimes sharp) competition with other scientific teams, culminating in a Nobel Prize. For students of how science actually happens, this is a book to be treasured and pored over."—Matt Ridley

"This exhilarating account of the race to understand the molecular machine that turns genes into flesh and blood is remarkable for its candid insights into the way science is really done, by human beings with all their talents and foibles. Venki Ramakrishnan, an outsider in the race, gives an insider's view of the decades-long quest to map the million atoms in the machine to fathom the fundamentals of life, pave the way for new antibiotics, and share the glory of the Nobel prize."—Roger Highfield

"In Gene Machine, one of the world's leading scientists reveals the reality of scientific discovery and the rivalry, collaboration and thrills that are involved. The result is a brilliant under-the-hood account of what it takes to win the Nobel Prize. Exciting and brutally honest, Venki's book explains the dramatic turns in the race to describe the structure of the ribosome--an essential component of every cell that has ever lived. I laughed out loud, I shouted in disbelief, and I learned so much from reading this book."—Matthew Cobb

"Quite a ride. This is a riveting personal account of the race to decipher the structure of the ribosome, one of the most complex and fundamental machines in the cell. The book takes up the baton from Watson's Double Helix, and like Watson, Ramakrishnan is disarmingly candid in tone, sometimes disquietingly so. His telling is laced with wisdom spun from a remarkable life story and the sharp lab anecdotes that are the lifeblood of everyday science."—Nick Lane

"This book is dynamite. Like no science book ever before, this is an honest, frank and simply jaw-dropping account of how a relative outsider ended up winning a Nobel Prize."—Daniel M. Davis

Venki Ramakrishnan shared the 2009 Nobel Prize in Chemistry for uncovering the structure of the ribosome. He is a senior scientist at the MRC Laboratory of Molecular Biology in Cambridge, UK, and also the president of the Royal Society in London.
Loading...
or support indie stores by buying on