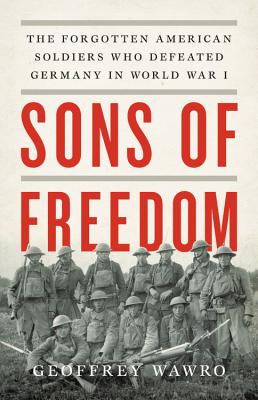 The Forgotten American Soldiers Who Defeated Germany in World War I

The American contribution to World War I is one of the great stories of the twentieth century, and yet it has all but vanished from view. Historians have dismissed the American war effort as largely economic and symbolic. But as Geoffrey Wawro shows in Sons of Freedom, the French and British were on the verge of collapse in 1918, and would have lost the war without the Doughboys. Field Marshal Douglas Haig, commander of the British Expeditionary Force, described the Allied victory as a "miracle" -- but it was a distinctly American miracle.

In Sons of Freedom, prize-winning historian Geoffrey Wawro weaves together in thrilling detail the battles, strategic deliberations, and dreadful human cost of the American war effort. A major revision of the history of World War I, Sons of Freedom resurrects the brave heroes who saved the Allies, defeated Germany, and established the United States as the greatest of the great powers.

Praise For Sons of Freedom: The Forgotten American Soldiers Who Defeated Germany in World War I…

"A stirring story and a careful work of military history."—Wall Street Journal

"Well-researched and engaging...Wawro offers intriguing reexaminations of a devastating conflict...Sons of Freedom shows how the U.S. moved itself from isolationism to world power with startling speed, mostly on the shoulders of its muddy and bloodied Doughboys."—Dallas Morning News

"As the 100th anniversary of the end of World War I approaches, a loud 'huzzah' is due Geoffrey Wawro -- one of the few historians bold enough to declare that American intervention was decisive in the conflict."—Washington Times

"[A] masterpiece of military history...Sons of Freedom will change the way you look at how the World War was won."—Washington Book Review

"Wawro's ability to do research in the French and German languages, as well as English, makes him somewhat unique among American scholars who have written about the U.S. in World War I...[Wawro] reminds us of the important role played by Americans."—ARMY Magazine

"Geoffrey Wawro has written distinguished works of military history before, but this might be his most compelling. His tale of the Doughboys is gripping, his argument about their accomplishment is persuasive, and his enthusiasm for the era and the subject is irresistible."—H.W. Brands, author of The General vs. the President: MacArthur and Truman at the Brink of Nuclear War

"In this bold and bracing new history, Geoffrey Wawro argues that the American intervention in WWI was decisive, and that the Allies would not have won the war without it. What is more, the critical American contribution was not, as we are usually told, financial; nor even material or technological, as was the case in World War II. Rather, it was about raw infantry manpower. Surprising the Germans, American doughboys stormed heavily fortified German positions with little more than rifles, grenades, trench mortars, and bayonets, fueled by kill-or-be-killed grit and courage under fire. With Sons of Freedom, Wawro has rewritten the history of the Allied victory in 1918, bringing the last months of the war to gory, gas-choked and blood-soaked life, along with the forgotten Americans--of all races--who fought, bled, suffered and died to win it."—Sean McMeekin, author of July 1914: Countdown to War

"Geoffrey Wawro adds to his luster as one of America's leading military historians with the meticulously researched Sons of Freedom. He upends the conventional understanding of how World War I ended, showing that the military prowess of the American Expeditionary Forces was of critical importance in the defeat of Wilhelmine Germany even if the U.S. suffered far less than the other combatants. The Doughboys finally get their long overdue credit in this important work of revisionist history. Anyone who wants to understand what really happened in World War I must read this book."—Max Boot, author of The Road Not Taken: Edward Lansdale and the American Tragedy in Vietnam

"Sons of Freedom provides a wonderful description--warts and all--of the army that the United States sent to fight in France in 1918. Wawro's depiction of the battles is truly horrifying, and his analysis of the strategy and politics on both sides wonderfully clear. It is the best book yet about the Doughboys, and one of the most important I have read about the First World War."—Sir Michael Howard, Regius Professor of Modern History (emeritus), University of Oxford

"A definitive account of American intervention in the Great War...Wawro chronicles numerous military campaigns in detail...and does a particularly good job describing the brutality of the battles and the lasting effects on the survivors. Readers will sympathize with the soldiers and gain a better understanding of the sacrifices that millions of Americans made."—Booklist

"An appropriate tribute to the Americans of the First War."—New York Journal of Books

"The typical take on American participation in the First World War...is firmly that of a supporting role...Geoffrey Wawro's explosive new book Sons of Freedom sets out in the course of 500 pages to interrogate every last detail of this standard view, and virtually nothing of it survives intact...Utterly convincing."—Open Letters Review

"Powerful...A refreshingly solid correction for the record."—Roads to the Great War

Geoffrey Wawro is professor of history and director of the Military History Center at the University of North Texas and the author of six books, including A Mad Catastrophe: The Outbreak of World War I and the Collapse of the Habsburg Empire. Wawro lives in Dallas, Texas.
Loading...
or
Not Currently Available for Direct Purchase