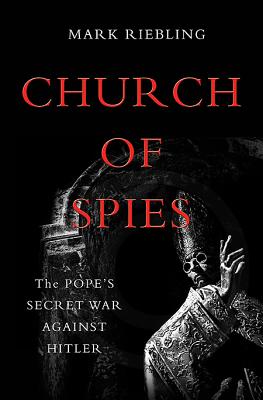 The Pope's Secret War Against Hitler

The heart-pounding history of how Pope Pius XII -- often labeled "Hitler's Pope" -- was in fact an anti-Nazi spymaster, plotting against the Third Reich during World War II.

The Vatican's silence in the face of Nazi atrocities remains one of the great controversies of our time. History has accused wartime pontiff Pius the Twelfth of complicity in the Holocaust and dubbed him "Hitler's Pope." But a key part of the story has remained untold.

Pope Pius in fact ran the world's largest church, smallest state, and oldest spy service. Saintly but secretive, he sent birthday cards to Hitler -- while secretly plotting to kill him. He skimmed from church charities to pay covert couriers, and surreptitiously tape-recorded his meetings with top Nazis. Under his leadership the Vatican spy ring actively plotted against the Third Reich.

Told with heart-pounding suspense and drawing on secret transcripts and unsealed files by an acclaimed author, Church of Spies throws open the Vatican's doors to reveal some of the most astonishing events in the history of the papacy. Riebling reveals here how the world's greatest moral institution met the greatest moral crisis in history.

Praise For Church of Spies: The Pope's Secret War Against Hitler…

"A groundbreaking new history of the Vatican-German resistance....Writing with the craft of a novelist and the conscience of a meticulous scholar, Riebling has produced a masterly account."—National Review

"A remarkable book....[Riebling] has written what is one of more important books on intelligence of the year."—Washington Times

"An amazing book that combines the rigor of history with the storytelling of a novel."—War on the Rocks

"[A] blockbuster of a book which not only defends Pius XII...but utterly demolishes the Black Legend by showing in intricate and meticulously documented detail...that from the very start of the war the Pope cooperated secretly with anti-Nazi forces in Hitler's thousand year Reich who sought, first, to remove the Führer from power; and when that failed, to kill him.... Riebling's book is beautifully written, and reads like a novel.... [R]iveting."—Catholic World Report

"While the Pope hesitated to publicly provoke Hitler in foolhardy way, he had no hesitation in secretly opposing the Third Reich and its crimes. The record of the assistance Pius XII provided, through his representatives, to the German resistance, and the actions they took, under his guidance, is extraordinary. Without minimizing the complicity of individual Christians, or the role of Christian anti-Semitism, Mark Riebling shows that the Vatican took a very powerful stance against the Nazis. It is especially important for Jewish people-and I am Jewish myself-that this information is now being gathered for all to see."—Sir Martin Gilbert, official biographer of Winston Churchill

"[F]ascinating...offers a compelling narrative of the actions taken by Pope Pius to stop Hitler from carrying out his campaign of world domination and ethnic cleansing. Backed by a mass of carefully compiled documentation, Riebling shows that Pius cooperated in a variety of plots, initiated by patriotic, anti-Nazi Germans, to assassinate Hitler and replace the National Socialist regime with a government that would make peace with the west."—Breitbart News

"Church of Spies shows, with significant research to back it up, that Pope Pius the Twelfth was not, in fact, Hitler's Pope, as he has wrongly been called, but quite the contrary, an enemy of Hitler's who worked behind the scenes against him. Mark Riebling documents how people of faith linked arms against evil that was Nazism and did not turn a blind eye against it. This is a fascinating, riveting, and a deeply important corrective to the false narrative about the Catholic church during World War II."—Eric Metaxas, New York Times #1 bestselling author, nationally syndicated radio host

"In this exciting and original work, Mark Riebling has unearthed vital new sources, and he writes elegantly and persuasively on a fascinating subject that has remained hidden in history's shadows."—Michael Burleigh, author of The Third Reich: A New History

"In Church of Spies, Mark Riebling provides a groundbreaking and riveting account of Pope Pius XII's secret war against Hitler. This richly documented book makes an important contribution to contemporary scholarship about Pius XII and to our understanding of the historical legacy of his pontificate."—Rabbi David Dalin, author of The Myth of Hitler's Pope

"Church of Spies sheds light on the secret actions and covert war waged by Pius, the Vatican, the German Catholic Church, and various German Catholic citizens against Hitler and the Nazis.... By weaving together numerous storylines in a chronological fashion from 1939 to 1945, the history of this period reads more like an exciting popular fiction spy novel than an academic work.... [A]n extremely readable and interesting work."—H-Net

"Riebling recounts in a fast, readable style the fumblings, betrayals, and bad luck that plagued attempts to remove Hitler. Through it all, he shows the Vatican looming in the background-the only support on which the conspirators could count, the only consistent contact they had with the Allies, and one of the few moral centers to which they could look."—Joseph Bottum, Washington Free Beacon

"[Church of Spies] adds a mass of new evidence to what we know, now, about what the Pope and the Church did to deal with the mortal threat to civilization posed by Hitler and German National Socialism."—George Weigel, author of First Things

Mark Riebling is a path-breaking writer on secret intelligence. The author of Wedge: The Secret War Between the FBI and CIA, he lives in New York.
Loading...
or support indie stores by buying on