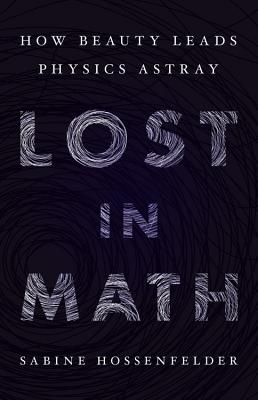 In this "provocative" book (New York Times), a contrarian physicist argues that her field's modern obsession with beauty has given us wonderful math but bad science.
Whether pondering black holes or predicting discoveries at CERN, physicists believe the best theories are beautiful, natural, and elegant, and this standard separates popular theories from disposable ones. This is why, Sabine Hossenfelder argues, we have not seen a major breakthrough in the foundations of physics for more than four decades.
The belief in beauty has become so dogmatic that it now conflicts with scientific objectivity: observation has been unable to confirm mindboggling theories, like supersymmetry or grand unification, invented by physicists based on aesthetic criteria. Worse, these "too good to not be true" theories are actually untestable and they have left the field in a cul-de-sac. To escape, physicists must rethink their methods. Only by embracing reality as it is can science discover the truth.


Praise For Lost in Math: How Beauty Leads Physics Astray…

"According to the physicist and prolific blogger Sabine Hossenfelder, Einstein and others who work in a similar way are 'lost in math,' the title of her lively and provocative book."—Wall Street Journal

"Hossenfelder ably mixes simplified explanation of the science with compelling portraits of the fascinating characters who study it."—Vanity Fair

"In her new book, Lost In Math, Sabine Hossenfelder adroitly confronts this crisis head on.... The book is a wild, deep, thought-provoking read that would make any reasonable person in the field who's still capable of introspection doubt themselves."—Forbes

"Lost in Math is self-aware and dosed with acerbic wit, and it asks bold questions."—Nature

"[Hossenfelder's] critical assessment of the field is appropriately timed." —Science

"Eavesdrop on accessible and frank conversations in Hossenfelder's Lost in Math, which wrestles with big questions of quantum mechanics and beauty in a fun, fascinating way."—Popular Science

"Hossenfelder's jaunt through the world of theoretical physics explicitly raises the question of whether the activities of thousands of physicists should actually count as 'science.' And if not, then what in tarnation are they doing?"—Weekly Standard (UK)

"Even educated readers will struggle to understand the elements of modern physics, but they will have no trouble enjoying this insightful, delightfully pugnacious polemic about its leading controversy."—Kirkus (starred review)

"This layreader-friendly, amusing treatise gives an enlightening look at a growing issue within physics."—Publishers Weekly

"Emphasizing how much researchers have achieved in quantum mechanics while using math that is decidedly ugly, Hossenfelder urges her colleagues to start focusing on reality, not conceptual style. A provocative appeal for unattractive but fruitful science."—Booklist

"Hossenfelder, a philosophically inclined physicist, presents the informed reader with a fascinating panorama of the current state of physics, replete with imaginative entities like wormholes, parallel universes, and bubbles associated with the baby universe whose existence cannot be established or falsified through standard experimental modes."—CHOICE

"Born too late to savor the heady era when the standard model of particle physics came together, Sabine Hossenfelder is impatient for new waves of discovery. Might the pace of insights be slowing because illusions of mathematical beauty have beguiled her fellow theorists? Lost in Math chronicles her quest--through interviews and conversations--to set her own course for exploration."—Chris Quigg, Distinguished Scientist Emeritus, Fermi National Accelerator Laboratory

"Lost in Math is a delight. It is engaging, witty, and utterly profound. If you want to know why so many contemporary theoretical physicists choose to believe unbelievable things, this is a great place to start."—Jim Baggott, author of Farewell to Reality

"Centered around insightful interviews with leading theorists, Lost in Math provides a well-informed take on the current state of fundamental physical theory, from a physicist who is utterly fearless, completely honest, and quite funny."—Peter Woit, mathematical physicist at Columbia University and author of Not Even Wrong

Sabine Hossenfelder is a research fellow at the Frankfurt Institute for Advanced Studies, where she studies the phenomenology of quantum gravity. She has published more than fifty research articles on physics, cosmology, and quantum mechanics. She resides in Frankfurt, Germany.
Loading...
or support indie stores by buying on