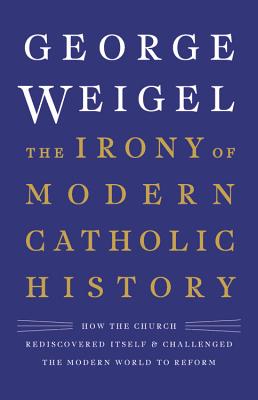 The Irony of Modern Catholic History

A powerful new interpretation of Catholicism's dramatic encounter with modernity, by one of America's leading intellectuals
Throughout much of the nineteenth century, both secular and Catholic leaders assumed that the Church and the modern world were locked in a battle to the death. The triumph of modernity would not only finish the Church as a consequential player in world history; it would also lead to the death of religious conviction. But today, the Catholic Church is far more vital and consequential than it was 150 years ago. Ironically, in confronting modernity, the Catholic Church rediscovered its evangelical essence. In the process, Catholicism developed intellectual tools capable of rescuing the imperiled modern project.
A richly rendered, deeply learned, and powerfully argued account of two centuries of profound change in the church and the world, The Irony of Modern Catholic History reveals how Catholicism offers twenty-first century essential truths for our survival and flourishing.

Praise For The Irony of Modern Catholic History: How the Church Rediscovered Itself and Challenged the Modern World to Reform…

"As with all Weigel's writing, this story is well told-richly illustrated with lively anecdotes, cogent summaries of complex ideas, and revealing quotations."—National Review

"Weigel advances a bold but credible interpretation of almost 200 years of ecclesiastical history, tracing the Church's engagement with modernity from the 19th century through today.... Weigel's ideas are certainly worth serious examination. Highly recommended."—National Catholic Register

"A fascinating look at the Catholic Church's encounter with modernity...Weigel is at once highly intellectual and thoroughly accessible as a writer as well as balanced and opinionated...A must-read book for Catholics and devotees of religious history."—Kirkus (starred review)

"George Weigel is the most interesting and authoritative American scholar and analyst of the Roman Catholic Church...[His] book is intended to refute the common notion that Catholicism has resisted modernity consistently and mostly ineffectively and has suffered as a consequence of its stubborn refusal to 'change with the times.' The truth, Weigel shows, is much more complicated than that."—New York Journal of Books

"[An] important new work...St. Teresa of Avila had it right when she said that 'God writes straight with crooked lines.' George Weigel's The Irony of Modern Catholic History traces those crooked lines in modern church history."—Washington Times

"A comprehensive interpretation of the history of the Catholic Church's encounter with modernity...This story is well told."—First Things

"Weigel ranks among the leading Christian public intellectuals of the past four decades. Stylistically, The Irony of Modern Catholic History is a pleasure to read. But the easy style disguises the fact that it's also an exercise in superb historical scholarship, from the reactionary Pope Gregory XVI in the mid-19th century, through the Modernist crisis and Vatican II, to the present."—Crisis Magazine

"Compelling...Weigel has a great eye for facts that raise eyebrows and provoke reflection...[He] is also a high-calibre phrasemaker."—Catholic Herald (UK)

"Weigel ranks among the leading Christian public intellectuals of the past four decades. Stylistically, The Irony of Modern Catholic History is a pleasure to read. But the easy style disguises the fact that it's also an exercise in superb historical scholarship, from the reactionary Pope Gregory XVI in the mid-19th century, through the Modernist crisis and Vatican II, to the present."—Catholic Philly

"This deeply learned and crisply written book reaffirms George Weigel's status as the preeminent American Catholic intellectual of our time. Weigel recasts recent history to show how we owe much of what is best and most noble in modernity to Catholicism and why, even in this season of ecclesial despair, Catholics have sound reasons to be hopeful."—Sohrab Ahmari, author of From Fire, By Water: My Journey to the Catholic Faith

"Weigel has an eye for a good story. Whether discussing the affairs of popes and princes, of conclaves and concordats, he seems always to come up with a telling anecdote or witty utterance to brighten the historical account. For a lively and informative overview from the 18th century to the present, The Irony of Modern Catholic History is the book to read."—Robert Louis Wilken, William R. Kenan Jr. Professor Emeritus of the History of Christianity at the University of Virginia

"George Weigel is deeply learned and passionately engaged -- one of the important intellectual assets of the 21st century Catholic Church. His book is fascinating and visionary."—Lance Morrow

"George Weigel's sweeping account of 150 years of Catholic history challenges the long-held assumption made by traditionalists, progressives, many historians, and mainstream media that secular modernity has always been the prime mover, forcing the Church to either resist or accommodate it. In reframing the narrative with the church as the creative protagonist in this drama, Weigel describes how the encounter with modernity led to the renewal of the church's gospel-centered mission in its third millennium, and suggests that the church might redirect -- indeed, redeem--the modern project itself."—Kathleen Sprows Cummings, Director of the Cushwa Center for the Study of American Catholicism, University of Notre Dame

"The Irony of Modern Catholic History advances a bold new interpretation of the Church and modernity with characteristic authority, deep erudition, and literary panache. It is the latest reminder among many that George Weigel is unrivaled not only as a Catholic intellectual, but as an intellectual, period."—Mary Eberstadt, senior research fellow, Faith and Reason Institute, and author of Primal Screams: How the Sexual Revolution Created Identity Politics

George Weigel is distinguished senior fellow of Washington's Ethics and Public Policy Center and one of America's leading public intellectuals. The first volume of his biography of Pope John Paul II, Witness to Hope, was a New York Times bestseller, and his writing appears regularly in a variety of publications, including the Wall Street Journal. He lives in North Bethesda, Maryland.
Loading...
or support indie stores by buying on