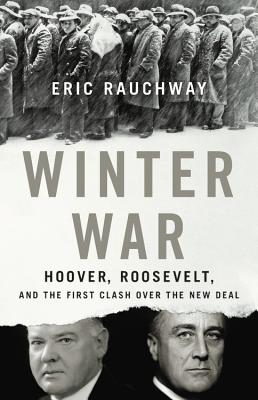 Hoover, Roosevelt, and the First Clash Over the New Deal

Praise For Winter War: Hoover, Roosevelt, and the First Clash Over the New Deal…

"A crisp narrative of the four-month interregnum between Franklin D. Roosevelt's victory in November 1932 and his assumption of the presidency in March 1933."—The Atlantic

"Rauchway paints a vivid picture of what that looks like as he describes the Herculean efforts of outgoing Herbert Hoover to thwart incoming Franklin Roosevelt's 'New Deal.'"—New York Journal of Books

"Though scholars have not ignored those four months, the
period was a spectacularly eventful one that deserves closer attention.
Rauchway ... does just that in this lively, opinionated, and definitely not
revisionist history."—Kirkus

"The book showcases strong scholarship, including deep engagement with archival materials, that a general audience can appreciate. This is an informative and readable history."—Publishers Weekly

"Not since the secession winter of 1860-61 had American democracy seemed so imperiled. Yet the interregnum between Herbert Hoover and Franklin Roosevelt has been largely overlooked by historians. Eric Rauchway remedies this lack in a riveting, thought-provoking book that is especially valuable at a time when political emotions are again running high."—H.W. Brands, author of Heirs of the Founders

"Winter War is a vivid narrative about the critical debate that took place at the pit of the Great Depression between presidents with starkly different visions of the nation's future. You can hear the echoes of FDR vs. Hoover blaring out from every cable news channel today. Eric Rauchway, one of America's best political historians, has written a wise story about the past that anyone who cares about the divide between progressives and conservatives should read."—Michael Kazin, professor of history at Georgetown University and author of War Against War: The American Fight for Peace, 1914-1918

"Presidential
transitions matter. This brilliant book describes how the transition from
Herbert Hoover to Franklin Roosevelt changed the world, and how it almost did
not happen. The author explains why the trenchant debates around the New Deal
still resonate in our current partisanship. Every citizen concerned about
political leadership should read this book."—Jeremi Suri, author of The Impossible Presidency: The Rise and Fall of America's Highest Office

"In this brilliant new book, Eric Rauchway provides powerful new insights about the making and the meaning of the New Deal. In the end, Winter War will change not just what we thought we knew about Hoover and Roosevelt, but how we have understood the origins of modern conservatism itself."—Kevin M. Kruse, author of One Nation Under God: How Corporate America Invented Christian America

Eric Rauchway is a distinguished historian and expert on the Progressive and New Deal eras at the University of California, Davis. He is the author of several acclaimed books on the subject, including The Money Makers, The Great Depression and the New Deal, and Blessed Among Nations, and has contributed to the New York Times, the Washington Post, the Financial Times, the New Republic, the Los Angeles Times, Dissent, and the American Prospect. He lives in Davis, California.
Loading...
or
Not Currently Available for Direct Purchase