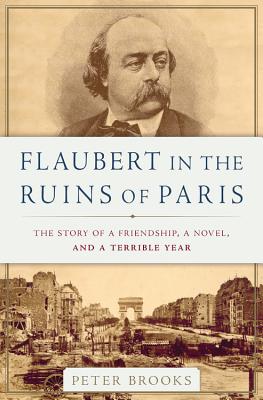 Flaubert in the Ruins of Paris (Hardcover)

The Story of a Friendship, a Novel, and a Terrible Year

From a distinguished literary historian, a look at Gustave Flaubert and his correspondence with George Sand during France's "terrible year" -- summer 1870 through spring 1871

From the summer of 1870 through the spring of 1871, France suffered a humiliating defeat in its war against Prussia and witnessed bloody class warfare that culminated in the crushing of the Paris Commune. In Flaubert in the Ruins of Paris, Peter Brooks examines why Flaubert thought his recently published novel, Sentimental Education, was prophetic of the upheavals in France during this "terrible year," and how Flaubert's life and that of his compatriots were changed forever.

Brooks uses letters between Flaubert and his novelist friend and confidante George Sand to tell the story of Flaubert and his work, exploring his political commitments and his understanding of war, occupation, insurrection, and bloody political repression. Interweaving history, art history, and literary criticism-from Flaubert's magnificent novel of historical despair, to the building of the reactionary monument the SacrÃ©oeur on Paris's highest summit, to the emergence of photography as historical witness-Brooks sheds new light on the pivotal moment when France redefined herself for the modern world.

Praise For Flaubert in the Ruins of Paris: The Story of a Friendship, a Novel, and a Terrible Year…

"Deploying his characteristic precision, eloquence, nuance, and wit, Peter Brooks has produced not only a brilliant book about the relationship between history and culture but an oddly prescient and timely map for how contemporary writers might respond--with a useful and intelligently political art--following America's own 'terrible year.'"—David Shields

"Challenging and judicious, wide-ranging yet consistently focused, Flaubert in the Ruins of Paris is a delight to read. In full control of literary and political history, Peter Brooks makes an unimpeachable case for the importance of Flaubert's Sentimental Education as a prophetic historical novel, and in the process corrects and redeems the conventional image of Flaubert as a political reactionary and aloof resident in an ivory tower."—Victor Brombert, Henry Putnam University Professor at Princeton University and author of Trains of Thought

"From one of our finest literary critics, Flaubert in the Ruins of Paris reminds us of the power of great novels in dark times. This story about the entangled relationships of friends, fiction, history, and politics couldn't be more timely, and nobody tells it better than Peter Brooks."—Maya Jasanoff, Coolidge Professor of History, Harvard University
or
Not Currently Available for Direct Purchase
Copyright © 2020 American Booksellers Association