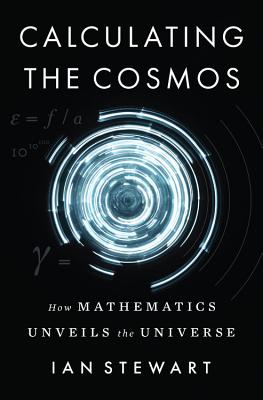 How Mathematics Unveils the Universe

In Calculating the Cosmos, Ian Stewart presents an exhilarating guide to the cosmos, from our solar system to the entire universe. He describes the architecture of space and time, dark matter and dark energy, how galaxies form, why stars implode, how everything began, and how it's all going to end. He considers parallel universes, the fine-tuning of the cosmos for life, what forms extraterrestrial life might take, and the likelihood of life on Earth being snuffed out by an asteroid.
Beginning with the Babylonian integration of mathematics into the study of astronomy and cosmology, Stewart traces the evolution of our understanding of the cosmos: How Kepler's laws of planetary motion led Newton to formulate his theory of gravity. How, two centuries later, tiny irregularities in the motion of Mars inspired Einstein to devise his general theory of relativity. How, eighty years ago, the discovery that the universe is expanding led to the development of the Big Bang theory of its origins. How single-point origin and expansion led cosmologists to theorize new components of the universe, such as inflation, dark matter, and dark energy. But does inflation explain the structure of today's universe? Does dark matter actually exist? Could a scientific revolution that will challenge the long-held scientific orthodoxy and once again transform our understanding of the universe be on the way? In an exciting and engaging style, Calculating the Cosmos is a mathematical quest through the intricate realms of astronomy and cosmology.

Praise For Calculating the Cosmos: How Mathematics Unveils the Universe…

"Stewart] shows that he is not only a polymath in the sense that he is a master of all fields of mathematics, but also in his comprehension of physics, astronomy, and cosmology...[In Calculating the Cosmos] he effectively shows that time and technology will evolve ever better calculations of the cosmos."—Kirkus Reviews

"Most popular books about science assume that readers cannot digest hard scientific facts, let alone formulae or graphs. Such works brim with chitchat about scientist' personalities but their density of formulation is low. A refreshing exception is Ian Stewart's Calculating the Cosmos: How Mathematics Unveils the Universe. There are no personalities in the book and, despite the title, no math either, just lucid descriptions of the logical basis of modern cosmology."—Wall Street Journal, "What to Give: Science Books" holiday gift guide

"Telling the story of how scientists and mathematicians harness abstract mathematical relationships to figure out the real world, Stewart deftly highlights the interdependent nature of ideas.... Stewart is sure to please math lovers, history buffs, and science enthusiasts alike by covering an array of eras, innovators, and disciplines. With virtually no equations, readers learn about complicated mathematical theory in a friendly, conversational tone; whether he's discussing 'white holes,' why 'relativity and quantum mechanics are uneasy bedfellows,' or the shape of space itself, Stewart's pages flip of their own accord."—Publishers Weekly

"Mathematician and prolific writer Ian Stewart turns a lens on how maths has helped us to decipher the celestial. As space probes explore new ground from asteroids to regions beyond the heliopause, Earth-based number-crunching informs everything from Jupiter's asteroid-pitching tendencies, the behaviour of planetary rings and the stubborn shyness of dark matter to the 'interplanetary superhighway' that provides efficient routes between planets. A fascinating tour, seamlessly spliced and historically contextualized."—Nature

"Ian Stewart covers the long story of our beloved cosmos wearing mathematical glasses, and we can only be thankful that he has been our guide in this journey."—Numberplay (NYTimes.com), Marco Moriconi

"Stewart's wry sense of humor adds to this informative yet entertaining read.... Highly recommended for science readers who are up for a challenge."—Library Journal

"With captivating stories and his signature clarity, Ian Stewart shows us how math makes the world--and the rest of the universe--go round."—Steven Strogatz, professor of mathematics, Cornell University, and author of The Joy of x