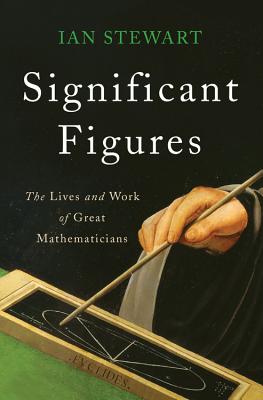 The Lives and Work of Great Mathematicians

In Significant Figures, acclaimed mathematician Ian Stewart explores the work of 25 of history's most important mathematicians, showing how they developed on each other's work and built the mathematics we use today.

Through these short biographies, we get acquainted with the history of mathematics from Archimedes to William Thurston, and learn about those too often left out of the cannon, such as Muhammad ibn Musa al-Khwarizmi, the creator of algebra; Ada Lovelace, the world's first computer programmer; and Emmy Noether, whose research on symmetry paved the way for modern physics.

Tracing the evolution of mathematics over the course of two millennia, Significant Figures will educate and delight aspiring mathematicians and experts alike.

Praise For Significant Figures: The Lives and Work of Great Mathematicians…

"Mathematics is the universal language, but some of its most prominent practitioners are forgotten figures--even though they've shaped our modern world. Significant Figures walks through the lives and work of 25 great mathematicians, from Archimedes to William Thurston. It's a great primer for those interested in where our universal language of numbers comes from."—Popular Mechanics

"Stewart folds into his biographies a broad swath of mathematics, including Euclidian and non-Euclidean geometries, set theory, calculus, algebra, and topology; readers with an affinity for math will find the material challenging and fun."
—Publishers Weekly

"The biographies that appear here are interesting and accessible; anybody with an interest in mathematics or history would likely enjoy perusing them."—MAA Reviews

"One of the stated goals of this book is to dispel the idea that mathematicians are boring, and this delightful title goes a long way toward that aim."—Library Journal

"Stewart has written a worthy successor to Bell's far-from-outdated classic [Men of Mathematics]-- one that may in time incline an even greater number of young readers to pursue careers in mathematics. Meanwhile, working professionals curious about the lesser-known masters profiled in the book, yet lacking the time or inclination to digest an entire biography, will find Significant Figures both informative and entertaining."—SIAM News

"Part advanced math lesson and part history
book, Stewart's celebration of seminal mathematicians and their findings will
appeal to anyone who wants to better understand the building blocks of many of
today's sciences."—Booklist

"Stewart is the least modish
of writers, delivering new scholarship on ancient Chinese and Indian
mathematics to supplement a well-rehearsed body of knowledge about the western
tradition. A prolific writer himself, Stewart is good at identifying the
audiences for mathematics at different periods."—Spectator

"The search for
mathematical truth, no matter how abstract, is ultimately carried out by
flesh-and-blood people. In this readable book, Ian Stewart makes math
accessible by humanizing its greatest practitioners, simultaneously
illuminating who they were and the discoveries they made. You cannot read it
without being struck by admiration for the driven souls who created mathematics
over the centuries."—Sean Carroll, author of The Big Picture: On the Origins of Life, Meaning, and the UniverseItself

"This beautifully written
assemblage of the lives and work of the world's greatest mathematicians is both
humbling and inspiring. Stewart shows with his typical clarity how the power of
pure thought has shaped our world for over two millennia."—J.S. Al-Khalili, OBE, Professor of Physics,University of Surrey

"Professor Ian
Stewart shows us emphatically that great mathematicians have often also been
public servants, political activists and expositors, not just lone geniuses or
one-track minds. Mathematics for all its abstraction is a communal and human
activity, and this is vividly captured in this fascinating whistlestop tour of
the human lives behind the greatest mathematics in history."—Dr. Eugenia Cheng, Scientist In Residence,School of the Art Institute of Chicago, author of How to Bake Pi and BeyondInfinity

"In his latest book, master
mathematics expositor Ian Stewart delivers on his catchy title with succinct
summaries of twenty-five of the most influential mathematicians of all time.... Stewart provides a concise
overview of what has been hot in math at different times in the discipline's
history. A great way for an outsider to get a sense of the huge historical arc
of mathematical discoveries that has led to the mathematics--and the world--of
today. I recommend it."—Keith Devlin, Stanford University, author of The Man of Numbers: Fibonacci's ArithmeticRevolution and Finding Fibonacci: TheQuest to Rediscover the Forgotten Mathematical Genius Who Changed the World