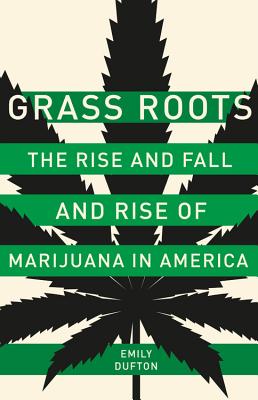 The Rise and Fall and Rise of Marijuana in America

How earnest hippies, frightened parents, suffering patients, and other ordinary Americans went to war over marijuana

In the last five years, eight states have legalized recreational marijuana. To many, continued progress seems certain. But pot was on a similar trajectory forty years ago, only to encounter a fierce backlash. In Grass Roots, historian Emily Dufton tells the remarkable story of marijuana's crooked path from acceptance to demonization and back again, and of the thousands of grassroots activists who made changing marijuana laws their life's work.

During the 1970s, pro-pot campaigners with roots in the counterculture secured the drug's decriminalization in a dozen states. Soon, though, concerned parents began to mobilize; finding a champion in Nancy Reagan, they transformed pot into a national scourge and helped to pave the way for an aggressive war on drugs. Chastened marijuana advocates retooled their message, promoting pot as a medical necessity and eventually declaring legalization a matter of racial justice. For the moment, these activists are succeeding -- but marijuana's history suggests how swiftly another counterrevolution could unfold.

Praise For Grass Roots: The Rise and Fall and Rise of Marijuana in America…

"Grass Roots is worth the time for anyone interested in the evolution of American drug laws. It's organized effectively, the writing is clear and crisp, and you can read it all in maybe two long flights, assuming your head is clear."—Wall Street Journal

"[An] even-handed chronicle... As Grass Roots expertly shows, the dialectical struggle over this most politically charged of products is far from over. We can put that in our pipes and smoke it."—Portland Oregonian

"Americans may now walk by medical marijuana dispensaries on their streets and encounter full legalization initiatives on their ballots. Dufton's book provocatively asks (and answers) the question: Why did this take so long? ... Grass Roots reorients the celebratory drug legalization story that is so often told today in a number of ways... [it] shows not just the caprice of U.S. drug policy, but how quickly and dramatically the legal and social changes called for by the hippie generation were quashed, creating a backlash still felt today."—New Republic

"A handy guide for weed activists who are returning to the fray with greater vigor than ever before, especially now that the Trump administration is rescinding Obama-era federal protections for the recreational cannabis industry."—Merry Jane

"Dufton's work expertly shows the cyclical nature of our society's relationship with marijuana, as well as the deeply entrenched racial and class divides that have added to the illicit nature of the complex drug."—The Riveter

"Dufton's book helps us learn from the mistakes of the past and apply that knowledge to the movement to legalize cannabis."—Culture

"Dufton's balanced and thoroughly researched book traces the long and still unwinding history of marijuana policy and activism in the U.S."—Booklist

"A comprehensive
history of marijuana legalization in America...Dufton puts years of dedicated
research, interviews, and social scrutiny to impressive use...The author's
astute, well-rounded report spotlights the virtual tug of war of the movement
and pays close attention to each side's setbacks and advancements. She presents
an engrossing, evenhanded timeline of the marijuana legalization revolution and
its backlash...A lively, perceptive refresher course on the politics of pot."—Kirkus Reviews

"Dufton makes a potent argument that, 'more than any other legal or illegal substance, marijuana is a drug that makes people care.'"—Publishers Weekly

"In Grass Roots, Emily Dufton traces the evolution of thinking and activism on marijuana over the past fifty years and provides important recommendations as we grapple with questions of decriminalization today. But even more than a compelling narrative history of marijuana in America, Dufton's is the story of the power of social movements to transform society and of subsequent resistance to those transformations. No matter what side of the marijuana debate you're on, Grass Roots will make you reflect on the meaning of democratic values and the role of government in our lives. A critical read."—Elizabeth Hinton, author of From the War on Poverty to the War on Crime: The Making of Mass Incarceration in America

"A balanced, comprehensive, scrupulously researched, and vividly rendered narrative cultural and political history of marijuana in America. Emily Dufton's passion for her subject matches the fervor of the pro- and anti-marijuana movements she chronicles. This book puts her well on the way to becoming one of the preeminent drug historians of her generation." —Martin Torgoff, author of Bop Apocalypse: Jazz, Race, the Beats, and Drugs and Can't Find My Way Home: America in the Great Stoned Age, 1945-2000

"Emily Dufton has done an admirable job focusing on the activists, both pro- and anti-marijuana, who have helped steer the conversation, and in some cases, the legality of our favorite weed. And she ends with a cautionary note: if you don't defend your freedom, it can be whisked away by a reactionary regime intent on imposing their morality on the multitudes."—Larry "Ratso" Sloman, author of Reefer Madness: A History of Marijuana

"Emily Dufton populates this brisk, three-act drama with a fascinating cast of marijuana activists and culture warriors, and reminds both sides that the long, see-saw struggle over America's most symbolically potent drug is far from over."—David T. Courtwright, author of Dark Paradise: A History of Opiate Addiction in America and Forces of Habit: Drugs and the Making of the Modern World

Emily Dufton holds a PhD in American Studies from George Washington University. She lives outside of Washington, DC.
Loading...
or
Not Currently Available for Direct Purchase