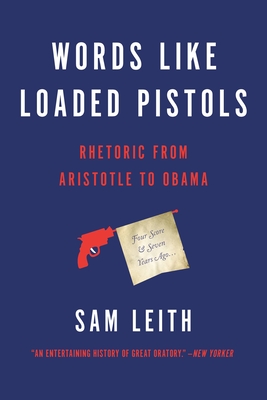 Rhetoric from Aristotle to Obama

"An entertaining history of great oratory" and a primer to rhetoric's key techniques (The New Yorker).

In Words Like Loaded Pistols, Sam Leith traces the art of persuasion, beginning in ancient Syracuse and taking us up to the Twitterverse. Along the way, he follows detours as varied and fascinating as Elizabethan England, Milton's Satanic realm, the Springfield of Abraham Lincoln and the Springfield of Homer Simpson. He explains how language has been used by the great heroes of rhetoric (such as Cicero and Martin Luther King Jr.), as well as some villains (like Adolf Hitler and Richard Nixon.) You'll find out how to build your own memory-palace; you'll be introduced to the Three Musketeers: Ethos, Pathos and Logos; and you'll learn how to use chiasmus with confidence and occultation without thinking about it. Most importantly of all, you will discover that rhetoric is useful, relevant -- and something you can master.

Sam Leith is a former literary editor of the Daily Telegraph, and contributes regularly to the Wall Street Journal, Prospect, Guardian, Evening Standard and Spectator. He is the author of How to Write and You Talkin' to Me?, among other books. He lives in London.


Praise For Words Like Loaded Pistols: Rhetoric from Aristotle to Obama…

"Delightful
and illuminating.... Words Like Loaded Pistols sports a
fabulous assortment of examples of time-tested rhetorical gambits in action....
The marvel is not that the old techniques still work, but that we ever
persuaded ourselves that we could do without them."—Salon

"Timed
for a presidential election year, this sassy, smart book outlines and
illustrates nearly every rhetorical trope and flourish related to the art of
persuasion.... Leith can be fiendishly entertaining."—Publishers Weekly

"Leith
brings to life a forgotten but eternally essential subject.... Leith uses every
tool in the rhetorician's arsenal to argue for rhetoric's continuing relevance....
Readers will gain a great deal of insight into how humans use communication to
get what they want...the book fulfills Cicero's three objectives of rhetoric:
'to move, educate, and delight.'"—Kirkus Reviews

"In this entertaining work of scholarship, Sam Leith revives the powerful discipline of classical rhetoric.... Leith is a gifted listener, and will not only tell you that 'Friends, Romans, countrymen' is a swelling tricolon but also which power ballad's opening bars it most resembles (AC/DC's Back in Black: 'DUM! DUH-dum! DUH-dum-dum!')"—London Evening Standard (UK)

"Leith attempts to reclaim rhetoric with a breezy book that sprays
around examples from history, politics and popular culture to outline the
building blocks of public speech, flitting happily from Cicero to J-Lo, from
Hitler to Homer Simpson.... Leith's often engaging examples lighten any sense
of learning."—The Observer (UK)

"It is through a welter of colloquial examples and eccentric line
readings that the book really comes alive.... While the formal study of
rhetoric might have collapsed under its own weight, Leith offers a slimmed-down
version that is sure to enlighten."—The Financial Times (UK)

"A highly entertaining and erudite whisk through the subject
[of rhetoric].... It's not hard to agree that a little rhetorical knowledge is
a wonderful thing, and Leith's work will indeed prove instructive as well as
entertaining to those called on to speak in public."—The Guardian (UK)

"This requires more than a cursory glance to appreciate its genius
properly, but Leith's great gift is the ability to plunder the everyday to
illustrate the rarefied...He describes the development of rhetoric beautifully,
and even after the most cursory dip into this, you begin to hear the world in a
completely different, illuminated way."—Telegraph (UK)

"A magnificently entertaining romp through the intricacies of classic
rhetorical technique from Aristotle to Obama.... The genius of the book...is
the irreverent and humorous range of examples he calls on to illustrate
rhetoric in action."—Professionally Speaking (blog)

"Engrossing.... When it comes to Obama, Leith's scrutiny is painstaking
and he is especially illuminating on Obama's debts to Abraham Lincoln and
Martin Luther King."—Independent (UK)