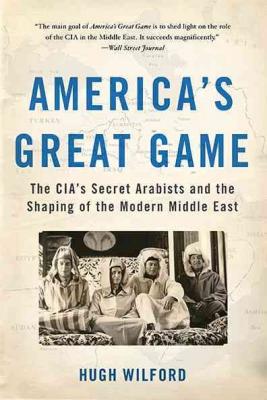 From the 9/11 attacks to waterboarding to drone strikes, relations between the United States and the Middle East seem caught in a downward spiral. And all too often, the Central Intelligence Agency has made the situation worse. But this crisis was not a historical inevitability -- far from it. Indeed, the earliest generation of CIA operatives was actually the region's staunchest western ally.

In America's Great Game, celebrated intelligence historian Hugh Wilford reveals the surprising history of the CIA's pro-Arab operations in the 1940s and 50s by tracing the work of the agency's three most influential -- and colorful -- officers in the Middle East. Kermit "Kim" Roosevelt was the grandson of Theodore Roosevelt and the first head of CIA covert action in the region; his cousin, Archie Roosevelt, was a Middle East scholar and chief of the Beirut station. The two Roosevelts joined combined forces with Miles Copeland, a maverick covert operations specialist who had joined the American intelligence establishment during World War II. With their deep knowledge of Middle Eastern affairs, the three men were heirs to an American missionary tradition that engaged Arabs and Muslims with respect and empathy. Yet they were also fascinated by imperial intrigue, and were eager to play a modern rematch of the "Great Game," the nineteenth-century struggle between Britain and Russia for control over central Asia. Despite their good intentions, these "Arabists" propped up authoritarian regimes, attempted secretly to sway public opinion in America against support for the new state of Israel, and staged coups that irrevocably destabilized the nations with which they empathized. Their efforts, and ultimate failure, would shape the course of U.S. -- Middle Eastern relations for decades to come.

Hugh Wilford is a professor of history at California State University, Long Beach, and author of four books, including The Mighty Wurlitzer: How the CIA Played America. He lives in Long Beach, California.
Loading...
or
Not Currently Available for Direct Purchase