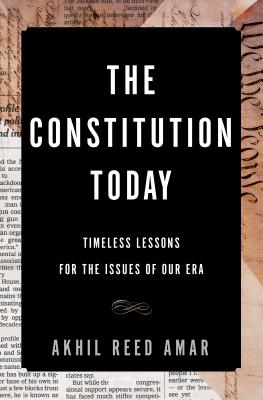 Timeless Lessons for the Issues of Our Era

In The Constitution Today, Akhil Reed Amar, America's preeminent constitutional scholar, considers the biggest and most bitterly contested debates of the last two decades and provides a passionate handbook for thinking constitutionally about today's headlines. Amar shows how the Constitution's text, history, and structure are a crucial repository of collective wisdom, providing specific rules and grand themes relevant to every organ of the American body politic. Prioritizing sound constitutional reasoning over partisan preferences, he makes the case for diversity-based affirmative action and a right to have a gun in one's home for self-protection, and against spending caps on independent political advertising and bans on same-sex marriage. He explains what's wrong with presidential dynasties, advocates a "nuclear option" to restore majority rule in the Senate, and suggests ways to reform the Supreme Court. And he revisits three dramatic constitutional conflicts -- the impeachment of Bill Clinton, the contested election of George W. Bush, and the fight over Barack Obama's Affordable Care Act -- to show what politicians, judges, and journalists got right as events unfolded and what they missed.

Leading readers through the particular constitutional questions at stake in each episode while outlining his abiding views regarding the Constitution's letter, its spirit, and the direction constitutional law must go, Amar offers an essential guide for anyone seeking to understand America's Constitution and its relevance today.

Akhil Reed Amar is the Sterling Professor of Law and Political Science at Yale University. The author of several books, including America's Unwritten Constitution, and the winner of awards from both the American Bar Association and the Federalist Society, Amar lives in Woodbridge, Connecticut.

Praise For The Constitution Today: Timeless Lessons for the Issues of Our Era…

Roanoke Times
“If I were stranded in a remote area and could have only one book to read, that book would be written by Akhil Reed Amar — any Amar book. Each one is filled with thoughtful examinations of the United States Constitution.”

Time.com, Top 10 nonfiction books of 2016
"A book on the Constitution may not have felt so urgent or timely in any other year, but in the wake of the Khan family's appearance at the Democratic National Convention—and the president-elect's subsequent affront—Amar's expert framework of our nation's most fundamental document feels desperately needed."

Library Journal, Starred Review
“Impressively, Amar presents a panoramic view of recent history through the lens of Constitutional interpretation. Moreover, he accomplishes this in layman's language, so that his insights are accessible to general readers. Indeed, Amar's professed intent is to educate journalists on Constitutional issues, and he succeeds unequivocally, explaining what's at stake in landmark cases such as Bush v. Gore and Citizens United, while commenting on the constitutionality of the Second Amendment and the exclusionary rule.”

Norman Ornstein, author of It's Even Worse Than It Looks
“Akhil Amar knows the Constitution and loves the Constitution. That is true of many scholars. But Amar is among the very, very few who can write about the Constitution with not just deep knowledge but with insight, verve, an understanding of both history and politics, and passion, and in a way that can be appreciated by legal scholars and lay readers alike. The Constitution Today shows Amar at his best, covering the widest range of areas with strong opinions that are anything but predictable and doctrinaire. At a time when many of the fundamentals of our system are under challenge, this book could not be more timely or welcome.”

Alan Dershowitz, author of Taking the Stand: My Life in the Law
“Akhil Amar's compelling and readable new book is so cram-filled with provocative and ground-breaking ideas that no one will agree with them all. I, for one, couldn't disagree more with his opposition to exclusionary rules. But every reader will acknowledge the cogency of his arguments. He makes you think, reconsider your ideas and admire his sheer brilliance.”

Weekly Standard
“The Constitution Today hits hard; what is more, it dares the reader to hit back. In this regard, it showcases scholarship fulfilling its greatest potential: engaging meaningfully and unflinchingly with the world beyond the university in terms intelligible to the layperson. To be sure, Amar is a powerful intellectual force within the academy, where his work on constitutional history continues to shape our understanding of the Bill of Rights. He is also an authority within the legal profession, where his scholarship is routinely cited by the Supreme Court. But these essays showcase Amar's influence in a different way, reflecting the capacity of a serious scholar and gifted teacher to educate an audience beyond the lecture hall—to distill complex constitutional questions into terms accessible to inquisitive citizens.”

Los Angeles Review of Books
“Amar is at his best when providing historical insights to modern-day constitutional issues... what his new book exemplifies is a consistent commitment over two decades to speak to issues beyond the academic, to engage with audiences beyond a New Haven classroom, and to use the perch and resources of his academic appointment to help the rest of us learn more about the history and principles that guide us today.”
or
Not Currently Available for Direct Purchase
Copyright © 2020 American Booksellers Association