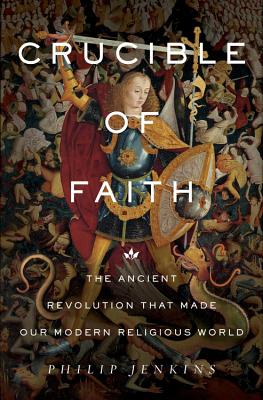 The Ancient Revolution That Made Our Modern Religious World

In The Crucible of Faith, Philip Jenkins argues that much of the Judeo-Christian tradition we know today was born between 250-50 BCE, during a turbulent "Crucible Era." It was during these years that Judaism grappled with Hellenizing forces and produced new religious ideas that reflected and responded to their changing world. By the time of the fall of the Temple in 70 CE, concepts that might once have seemed bizarre became normalized-and thus passed on to Christianity and later Islam. Drawing widely on contemporary sources from outside the canonical Old and New Testaments, Jenkins reveals an era of political violence and social upheaval that ultimately gave birth to entirely new ideas about religion, the afterlife, Creation and the Fall, and the nature of God and Satan.

Praise For Crucible of Faith: The Ancient Revolution That Made Our Modern Religious World…

"Absorbing and accessible...Like the writings of historian Karen Armstrong (A History of God), the book invites readers with a nonspecialist background to consider the historical roots of religious ideas and practices that many take for granted as eternal truths."
—Publishers Weekly

"Jenkins tackles the intertestamental period or Crucible Era between the closure of the canonical Old Testament texts and before the birth of Jesus described in the New Testament.... Well-researched and well-argued."
—Library Journal

"A well-written, intriguing account of the centuries that set the stage for modern Judaism, the Christianity taught by Paul, and, eventually, Islam."
—Kirkus Reviews

Philip Jenkins is a distinguished professor of history at the Institute for Studies of Religion, Baylor University. The author of twenty-seven books, Jenkins divides his time between Texas and Pennsylvania.
Loading...
or
Not Currently Available for Direct Purchase