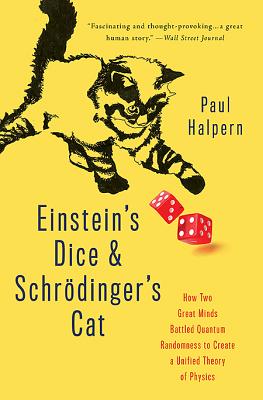 "A fascinating and thought-provoking story, one that sheds light on the origins of . . . the current challenging situation in physics." -- Wall Street Journal

When the fuzzy indeterminacy of quantum mechanics overthrew the orderly world of Isaac Newton, Albert Einstein and Erwin SchrÃ¶ger were at the forefront of the revolution. Neither man was ever satisfied with the standard interpretation of quantum mechanics, however, and both rebelled against what they considered the most preposterous aspect of quantum mechanics: its randomness. Einstein famously quipped that God does not play dice with the universe, and SchrÃ¶ger constructed his famous fable of a cat that was neither alive nor dead not to explain quantum mechanics but to highlight the apparent absurdity of a theory gone wrong. But these two giants did more than just criticize: they fought back, seeking a Theory of Everything that would make the universe seem sensible again.

In Einstein's Dice and SchrÃ¶ger's Cat, physicist Paul Halpern tells the little-known story of how Einstein and SchrÃ¶ger searched, first as collaborators and then as competitors, for a theory that transcended quantum weirdness. This story of their quest-which ultimately failed-provides readers with new insights into the history of physics and the lives and work of two scientists whose obsessions drove its progress.

Today, much of modern physics remains focused on the search for a Theory of Everything. As Halpern explains, the recent discovery of the Higgs Boson makes the Standard Model-the closest thing we have to a unified theory- nearly complete. And while Einstein and SchrÃ¶ger failed in their attempt to explain everything in the cosmos through pure geometry, the development of string theory has, in its own quantum way, brought this idea back into vogue. As in so many things, even when they were wrong, Einstein and SchrÃ¶ger couldn't help but get a great deal right.

"[Told] with humor and concision."
—Nature

"This book can be put on the reading list of those who have enjoyed The Theory of Everything and want to know more."
—Physics World

"A highly approachable book that will appeal to readers...who are interested in physics, the history of science, and the human and political aspects of scientists and their work."
—Library Journal

"That's a lot to cover in a single book, and the author masters this challenge most thoroughly."
—MAA Reviews

"As a fan of popular science books and someone who has used phrases such as 'God does not play dice' and 'Schrodinger's Cat' in my songs, I found Paul Halpern's book illuminating and entertaining."
—Roland Orzabal, co-founding member of Tears for Fears

Paul Halpern is a professor of physics at the University of the Sciences in Philadelphia, and the author of sixteen popular science books, including The Quantum Labyrinth. He is also a Fellow of the American Physical Society. He lives near Philadelphia, Pennsylvania.
Loading...
or
Not Currently Available for Direct Purchase