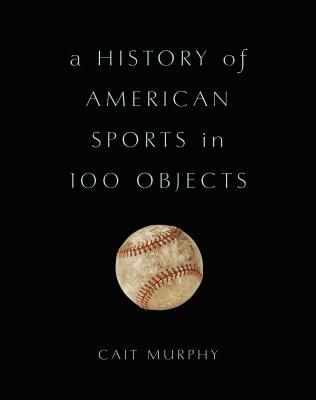 A History of American Sports in 100 Objects

Beautifully designed and carefully curated, a fascinating collection of the things that shaped the way we live and play in America

What artifact best captures the spirit of American sports? The bat Babe Ruth used to hit his allegedly called shot, or the ball on which Pete Rose wrote, "I'm sorry I bet on baseball"? Could it be Lance Armstrong's red-white-and-blue bike, now tarnished by doping and hubris? Or perhaps its ancestor, the nineteenth-century safety bicycle that opened an avenue of previously unknown freedom to women? The jerseys of rivals Larry Bird and Magic Johnson? Or the handball that Abraham Lincoln threw against a wall as he waited for news of his presidential nomination?

From nearly forgotten heroes like Tad Lucas (rodeo) and Tommy Kono (weightlifting) to celebrities like Amelia Earhart, Muhammad Ali, and Michael Phelps, Cait Murphy tells the stories of the people, events, and things that have forged the epic of American sports, in both its splendor and its squalor. Stories of heroism and triumph rub up against tales of discrimination and cheating. These objects tell much more than just stories about great games-they tell the story of the nation. Eye-opening and exuberant, A History of American Sports in 100 Objects shows how the games Americans play are woven into the gloriously infuriating fabric of America itself.

Praise For A History of American Sports in 100 Objects…

"Immensely entertaining and beautifully written... [Murphy's] selections resonate socially, politically, and technologically across American sports history, with each item containing a perceptive explanation of its significance. This is a great concept for a sports book, and it's expertly executed."
—Booklist, starred review

"Cait Murphy's A History of American Sports in 100 Objects has the balls to map our love of the game, one photograph at a time."—Vanity Fair, Hot Type

"Murphy is an insightful artist who has opened the doors to new understanding about the importance and the impact of sports on the playing field and in the community in general. To be more specific, she has brought to the reader of sports literature an understanding that is the soul of boarding schools and summer camps--places where everyone plays games--and the appreciation of the game itself becomes as important as winning. We call that good sportsmanship."
—Roanoke Times

"Entertaining... Murphy writes in a conversational, witty fashion, making wry observations without losing touch with the larger historical, social, and political significance of the events and athletes that give the objects their significance... An enjoyable romp through the things that helped make the sports we love."
—Kirkus Reviews

"It's almost unfair that someone could have as much fun putting together a book as Cait Murphy clearly did while working on this one. Her buoyant trip through the history of American sports is filled with surprise and delight."
—Daniel Okrent, author of Nine Innings

"How do we love sports? Cait Murphy counts the ways in this gem of a book. It ought to come with a warning label: these pages may be addictive."
—Jonathan Eig, author of Luckiest Man and Opening Day

"The items found within these pages are less objects than memorial markers, jumping-off points for a satisfying exploration of our nation's sporting history. Cait Murphy's descriptions are easy and informative, opening 100 windows though which to leap feet first-and, thanks to some adroit writing, the landing is always certain. Whether you're being reminded about things you already knew, or informed about vital history that may have eluded you, the ride is always a fun one."
—Jason Turbow, author of The Baseball Codes

Cait Murphy is an editor at McKinsey & Company. She previously worked for Fortune, the Economist, and the Asian Wall Street Journal. A mediocre athlete, she is the author of Crazy, about the 1908 baseball season. She lives in New York City.
Loading...
or
Not Currently Available for Direct Purchase