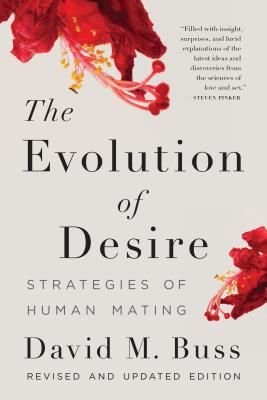 The Evolution of Desire

The groundbreaking, provocative book that uses evolutionary psychology to explain human mating and the mysteries of love.
If we all want love, why is there so much conflict in our most cherished relationships? To answer this question we must look into our evolutionary past, argues prominent psychologist David M. Buss. Based one of the largest studies of human mating ever undertaken, encompassing more than 10,000 people of all ages from thirty-seven cultures worldwide, The Evolution of Desire is the first work to present a unified theory of human mating behavior. Drawing on a wide range of examples of mating behavior -- from lovebugs to elephant seals, from the Yanomamö tribe of Venezuela to online dating apps -- Buss reveals what women want, what men want, and why their desires radically differ. Love has a central place in human sexual psychology, but conflict, competition, and manipulation also pervade human mating -- something we must confront in order to control our own mating destiny.

Updated to reflect the very latest scientific research on human mating, this definitive edition of this classic work of evolutionary psychology explains the powerful forces that shape our most intimate desires.

Praise For The Evolution of Desire: Strategies of Human Mating…

"Filled with insight, surprises, and lucid explanations of the latest ideas and discoveries from the sciences of love and sex."—Steven Pinker

David M. Buss is professor of psychology at the University of Texas at Austin and a past president of the Human Behavior and Evolution Society. He is the author of several books including The Evolution of Desire, The Dangerous Passion, The Murderer Next Door, and Why Women Have Sex (co-authored with Dr. Cindy Meston). He has written for publications such as the New York Times, Los Angeles Times, andPsychology Today, and he has made more than thirty television appearances on shows including CBS This Morning, ABC's 20/20, and NBC's Dateline and Today, among others.

Buss has received numerous awards, which include the Distinguished Scientific Award for Early Career Contribution to Psychology by the American Psychological Association (APA), a Fellowship at the Center for Advanced Study in the Behavioral Sciences at Stanford, and the G. Stanley Hall Award from the APA. Most recently, he received the Association for Psychological Science (APS) Mentor Award for Lifetime Achievement (2017).
Loading...
or
Not Currently Available for Direct Purchase