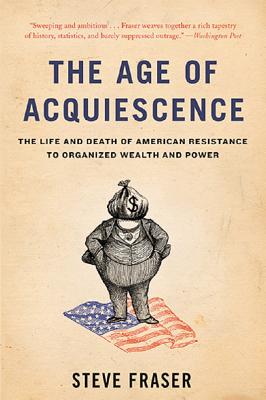 "Sweeping and ambitious . . . Fraser weaves together a rich tapestry of history, statistics and barely suppressed outrage." -- Maura Casey, The Washington Post From the Revolution through the Civil Rights Movement, Americans mobilized against political, social, and economic privilege. But over the last half-century that political will has vanished. In The Age of Acquiescence, Steve Fraser explains why. His account of national transformation brilliantly examines the rise of American capitalism, the visionary attempts to protect the democratic commonwealth, and the great surrender to today's delusional fables of freedom and the politics of fear. Effervescent and razorsharp, The Age of Acquiescence is indispensable for understanding why we no longer fight for a more just society, and how we can revive the great American tradition of resistance in our own time.

"Fraser longs for the passion and force with which Americans of earlier generations attacked aggregated power."
—Jill Lepore, The New Yorker

"Fraser offers a
sweeping, forcefully argued comparison between, on the one hand, the economy,
ideology, and politics of the first Gilded Age and, on the other, the
contemporary political scene."—Kim Phillips-Fein, Atlantic

"Fraser is our preeminent
historian of America as a capitalist civilization. No one is more attuned to
the inner vibrations of our monied culture...[he writes] a prose of sinuous
beauty."—Corey Robin, Salon

"Fraser is
particularly passionate and penetrating in his analysis of our present state of
submission and surrender."—JonWiener, Los Angeles Times