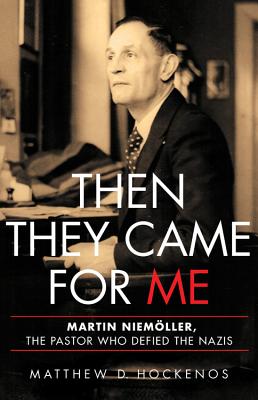 Then They Came for Me

Martin Niemöller, the Pastor Who Defied the Nazis

"First they came for the Communists, and I did not speak out-Because I was not a Communist . . . "

Few today recognize the name Martin NiemÃ¶r, though many know his famous confession. In Then They Came for Me, Matthew Hockenos traces NiemÃ¶r's evolution from a Nazi supporter to a determined opponent of Hitler, revealing him to be a more complicated figure than previously understood.

Born into a traditionalist Prussian family, NiemÃ¶r welcomed Hitler's rise to power as an opportunity for national rebirth. Yet when the regime attempted to seize control of the Protestant Church, he helped lead the opposition and was soon arrested. After spending the war in concentration camps, NiemÃ¶r emerged a controversial figure: to his supporters he was a modern Luther, while his critics, including President Harry Truman, saw him as an unrepentant nationalist.

A nuanced portrait of courage in the face of evil, Then They Came for Me puts the question to us today: What would I have done?

Praise For Then They Came for Me: Martin Niemöller, the Pastor Who Defied the Nazis…

"[A] clear-eyed biography.... Hockenos's portrait sheds valuable light on a man and a society willing to overlook the sins of a leader whose interests initially seemed to dovetail with their own."—New Yorker

"A supremely nuanced account of an enigmatic figure."—Winnipeg Free Press

"Using extensive research, Hockenos writes a nuanced, well-rounded analysis of Niemöller's transformation from fervent nationalist and supporter of the Nazi regime to opponent of Hitler's attempts to control the Lutheran Church in Germany."—Library Journal

"A valuable study in individual resistance to tyranny."—Kirkus Reviews

"In this engaging biography, Matthew Hockenos explores the many lives of Niemoller as he evolved from U-boat captain to clergyman to critic of Hitler to defender of the German people. Combining historical empathy with honest critical analysis, Hockenos masterfully demonstrates how a deeply flawed religious activist challenged an authoritarian political leader and changed the course of history."—Matthew A. Sutton, author of American Apocalypse

"Martin Niemoeller is best-remembered as an outspoken critic of Nazi Germany. As Matthew Hockenos shows in this penetrating and fast-paced biography, he was also an ardent early supporter of Hitler. By showing how strongly Niemoeller identified the Nazi regime with Germany's spiritual as well as political rebirth, Hockenos asks us to rethink what we understand about the nature of consent and opposition in Nazi Germany."—Nicholas Stargardt, author of The German War

"In this riveting and searingly honest work of humane scholarship, Matthew Hockenos shows how a deeply flawed figure can nevertheless bequeath a moral legacy of timeless relevance. The complex, if 'ordinary,' Niemoller merits a superb biography, and now has it."—James Carroll, author of Constantine's Sword and The Cloister

"Niemoller sunk Allied ships and called out for a Führer. He put God above Germany even though it was the same God who had cursed the Jews. In many ways, he was 'too German' and 'too Lutheran'--even in a concentration camp for the dissidence of his sermons, Niemoller volunteered to fight in Hitler's army. Hockenos makes sense of these jarring contradictions, portraying a remarkable, self-critical man in a highly readable but also critical biography. Readers will turn the pages of this book just as history turned the pages of Niemoller's life."—Peter Fritzsche, author of An Iron Wind

"Then They Came for Me is a moving and surprising look at Martin Niemoller. Based on extensive research and a profound understanding of history, it reveals Niemoller as a complex and flawed hero who embodied the nationalism, antisemitism, and militarism of his German Protestant surroundings but nonetheless proved able to change. Hockenos's wise and unsentimental biography is sure to challenge, inform, and entertain every reader."—Doris L. Bergen, author of War and Genocide

"A well-told story of faith, personal courage and repentance that speaks to a nation's journey through delusion and horror to contrition. With skill that weaves his deep research and knowledge of German history into a finely-knit biography, Matthew Hockenos takes us swiftly through Martin Niemoller's nine decades, from his origins in a family of monarchist, anti-Semitic, Lutheran ministers through his career as a naval officer and U boat commander, from his early support for the Nazis to his disillusionment and 8 years in concentration camps through his evolution into a pacifist icon and moral authority in turbulent post-war Germany."—Ethan Michaeli, author of The Defender

Matthew D. Hockenos is the Harriet Johnson Toadvine '56 Professor in 20th-Century History at Skidmore College. The author of A Church Divided: German Protestants Confront the Nazi Past, he lives in Round Lake, New York.
Loading...
or support indie stores by buying on