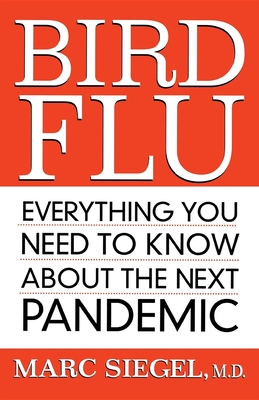 Everything You Need to Know about the Next Pandemic

Marc Siegel is an articulate voice of reason in a world beset by hype and hysteria. We would be well advised to listen closely to what he has to say.
-Jerome Groopman, M.D., staff writer, the New Yorker ""Siegel cuts through the hype about the 'deadly' this and the 'lethal' that, and applies reason in seeking the answers.""
-John M. Barry, author of The Great Influenza: The Epic Story of the Deadliest Plague in History ""Timely and needed. At such times, we need soothsayers and explicators to redirect the ready-fire-aim mindset. Siegel's book fulfills this role well.""
-The Journal of the American Medical Association As bird flu sweeps through Asia, the rest of the world has begun to worry that it might spread west and start infecting humans. As many experts have pointed out, an influenza pandemic is only a matter of time and that time could be now. Or is it? In Bird Flu, Dr. Marc Siegel cuts through the hype, the facts, the fears, and the realities to explain what has the experts so worried and why there's still plenty of reason to be calm. Among the questions he answers are:
* What is bird flu, and who has it?
* What can I do to protect my family?
* Should I stockpile Tamiflu?
* Will this be like the deadly Spanish flu of 1918?
* Why is there no bird flu vaccine?
* Will the annual flu shot protect me? In his sensible and entertaining style, Siegel looks at the advances we've made in treatments, the research still to be done, and the challenges ahead for Asia to lay out a realistic plan for ending this global threat. While a bird flu outbreak in the United States may or may not happen this year, there's still a great deal of work to be done in readying America for outbreaks of any kind.

MARC SIEGEL, MD, is a practicing internist, an associate professor at the New York University School of Medicine, and a member of "USA Today"'s board of contributors. He is a weekly columnist for the "New York Daily News, " and a frequent contributor to the "New York Times, Los Angeles Times, " "New York Post," "Family Circle, " and the "Washington Post." He has appeared regularly on the "Today Show," "Good Morning" "America," the "CBS Early Show," Fox News Channel, "ABC News," CNN, NPR, and Air America.
Loading...
or support indie stores by buying on