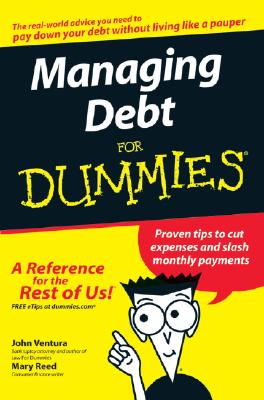 If you're trying to kick the "Buy Now/Pay Later" habit and get your spiraling debt under control, you need Managing Debt For Dummies now This practical, commonsense guide provides straightforward strategies for coping with every kind of secured and unsecured debt, including, personal loans, car loans, mortgages, home equity loans, lines of credit, credit cards, finance company loans, and student loans. You'll find out how easy it is to:

You can still live well while slashing spending on groceries, clothing, and entertainment. Find out how in Managing Debt for Dummies.

John Ventura: John is a best-selling author and a nationally boardcertified bankruptcy attorney. He is also an adjunct professor at the University of Houston Law School and the director of the Texas Consumer Complaint Center at the Law School. As a young boy, John dreamed of becoming a Catholic priest so he could help everyday people, and he spent his high school years in a Catholic seminary. After graduating, however, John decided to achieve his dream by combining journalism with the law. Therefore, he earned an undergraduate degree in journalism and a law degree from the University of Houston Law School. Later, he and a partner established a law firm in Texas, building it into one of the most successful consumer bankruptcy firms in the state. He subsequently began a successful consumer law firm in South Texas. Today, as Director of the Texas Consumer Complaint Center, he supervises law students as they help consumers with their legal problems. He is also a regular speaker at law conferences around the country and serves on the Bankruptcy Council for the Texas Bar Association. John is the author of 13 books on consumer and small business legal matters, including Law For Dummies, 2nd edition; The Everyday Law Kit For Dummies; Divorce For Dummies, 2nd edition; and Good Advice for a Bad Economy (Berkeley Books). John has been interviewed about consumer money matters by numerous national media including CNN, NBC, NPR, Bloomberg Television & Radio, The Wall Street Journal, USA Today, Newsweek, Kiplinger's Personal Finance, Money, Inc. Martha Stewart's Living, Bottomline, Entrepreneur, Bankrate.com, CBSMarketWatch.com, and MSNMoney.com. In addition, his comments and advice have appeared in major newspapers around the country, and he has been a frequent guest on local radio programs. Mary Reed: Mary Reed is a personal finance writer who has coauthored or ghostwritten numerous books on topics related to consumer money matters and legal rights. The books she has coauthored with John Ventura include The Everyday Law Kit for Dummies, Divorce For Dummies, and Good Advice for a Bad Economy (Berkeley Books). Mary has also written for the magazines Good Housekeeping, Home Office Computing, and Small Business Computing, and she has ghostwritten numerous articles that have appeared in national and local publications. Mary is also the owner of Mary Reed Public Relations (MR-PR), an Austin, Texas-based firm that provides public relations services to a wide variety of clients, including authors, publishers, attorneys, financial planners, healthcare professionals, retailers, hotels, restaurants, and nonprofits. Prior to starting her public relations business and writing career 20 years ago, she was vice president of marketing for a national market research firm, marketing director for a women's healthcare organization, and public relations manager for Texas Monthly, a national award-winning magazine. She received her MBA from Boston University and her BA from Trinity University in Washington, DC. In her free time, Mary serves on the board of a community development corporation in her neighborhood. She also enjoys long morning bike rides, road trips with her husband, gardening, working her way through the stack of books by her bed, taking care of her six cats, and spending time with her family and many friends.
or support indie stores by buying on
Copyright © 2020 American Booksellers Association