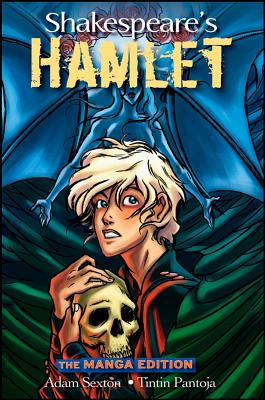 The sudden death of the king, later revealed to be murder. The queen’s all-too-sudden remarriage to the king’s brother, the murderer. The grieving, suspicious Prince Hamlet. Supernatural visitations. Plots, leaks, and counterplots. Poisoned wine. A rigged sword fight.  Revenge.

With a four-page introduction and an abridged text that remains true to Shakespeare’s wording, setting, and time, this fast-paced, graphic manga edition gets you caught up in the conflicts and passions that make this one of Shakespeare’s most beloved tragedies.

ADAM SEXTON is author of Master Class in Fiction Writing and editor of the anthologies Love Stories, Rap on Rap, and Desperately Seeking Madonna. He has written on art and entertainment for The New York Times and The Village Voice, and he has taught fiction writing and literature at New York University and Parsons School of Design. A graduate of Columbia University and the University of Pennsylvania, he lives in Brooklyn with his wife and son.

TINTIN PANTOJA is a graphic artist dividing her time between Indonesia and Manila. She graduated from the School of Visual Arts in New York in 2006, having arrived in New York; her first time in America a month before the World Trade Center attacks in 2001. She is now working on several illustrated projects. Tintin's work can be viewed on her Web site: tintinpantoja.com.
Loading...
or
Not Currently Available for Direct Purchase