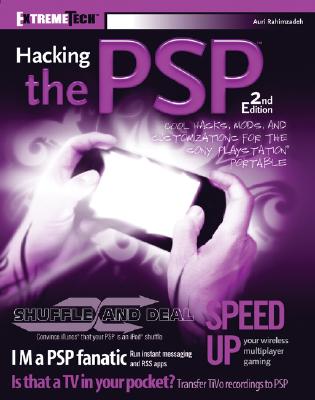 Cool Hacks, Mods, and Customizations for the Sony PlayStation Portable

We're not just playing games. You love your PSP. You loved the first edition of this book. If you're ready for more fun, here it is. Check out: Networking hacks that let you IM and speed up multiplayer game action. Awesome audio, video, and image hacks. Game hacks that let you use a single UMD cartridge for multiplayer games. The ever-popular homebrew applications, with secrets for sneaking them past the firmware. We're taking playtime to a whole new level.

Let the fun begin with complete instructions on how to do all this and more with your PSP, including:

Visit hackingpsp.com to post your questions on the author's forum, download any files you need, get updates to the book, and check out new hacks the moment they're available.

Auri Rahimzadeh has been tinkering with computers since he was six years old and loves all technology. Auri collects computers and has been involved with many computer projects, including teaching computers alongside Steve Wozniak, co-founder of Apple Computer. Auri has written hundreds of articles on various computer technologies; has contributed to many standards including HDTV, DVD, and interactive television; and is the author of Geek My Ride, a book on geeking out cars, another ExtremeTech title published by Wiley. Auri has also contributed to computer education for students across the country and has promoted technology awareness through the Indianapolis Computer Society, where he has served as president for four years. Currently, Auri owns The Auri Group (TAG), a software engineering firm in Indianapolis, and enjoys chatting with readers online, trying out jokes (some are actually good!), and playing with the latest technology to see where he can take it.
or
Not Currently Available for Direct Purchase
Copyright © 2020 American Booksellers Association