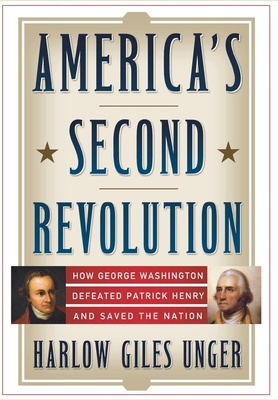 How George Washington Defeated Patrick Henry and Saved the Nation

Every American Interested in understanding the American character and the American past should read this book. There are vivid history lessons on almost every page. The constitution becomes not merely a brilliant blueprint for governance. It is-and was-also the only alternative to chaos. - Thomas Fleming, author of The Perils of Peace

Acclaim for The Unexpected George Washington.

It's hard to imagine George Washington as playful, tender, or funny. But Harlow Unger searches to find these seldom-seen aspects of the private man, and the result is a fare more complete and believable founding father."" - James C. Rees, Executive Director, Historic Mount Vernon

""An intimate view of the American hero who managed to follow his ambitions to great power without being disdained for them."" - Publishers Weekly

Harlow Giles Unger is author of the award-winning "Lafayette" (Wiley 2002), "John Hancock" (2000), "Noah Webster" (Wiley, 1998), "The French War Against America" (Wiley, 2005) and "The Unexpected George Washington" (Wiley, 2006). A veteran journalist, he was foreign news editor at "The New York Herald Tribune" and foreign correspondent for "The Times" and "Sunday Times" (London). He is also author of several books on education. He lives in New York City.
Loading...
or support indie stores by buying on