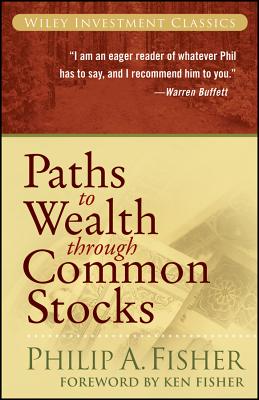 Paths to Wealth through Common Stocks contains one original concept after another, each designed to greatly improve the results of those who self-manage their investments -- while helping those who rely on professional investment advice select the right advisor for their needs.

Originally written by investment legend Philip A. Fisher in 1960, this timeless classic is now reintroduced by his well-known and respected son, successful money manager Ken Fisher, in a new Foreword.

Filled with in-depth insights and expert advice, Paths to Wealth through Common Stocks expands upon the innovative ideas found in Fisher's highly regarded Common Stocks and Uncommon Profits -- summarizing how worthwhile profits have been and will continue to be made through common stock ownership, and revealing why his method can increase profits while reducing risk. Many of the ideas found here may depart from conventional investment wisdom, but the impressive results produced by these concepts -- which are still relevant in today's market environment -- will quickly remind you why Philip Fisher is considered one of the greatest investment minds of our time.

PHILIP A. FISHER (1907-2004) began his career as a securities analyst in 1928 and founded Fisher & Company, an investment counseling business, in 1931. He is known as one of the pioneers of modern investment theory. After writing this book, Fisher taught at Stanford as one of only three to ever teach the Graduate School of Business Investment Management course. His other writings include investment classics such as Common Stocks and Uncommon Profits, Conservative Investors Sleep Well, and Developing an Investment Philosophy. KEN FISHER is best known for his prestigious Portfolio Strategy column in Forbes magazine, where his twenty-three-year tenure of high-profile calls makes him the fourth longest-running columnist in Forbes's ninety-year history. Ken is the founder, Chairman, and CEO of Fisher Investments, a multi-product money management firm with over $40 billion under management. His success has ranked him #297 on the 2006 Forbes 400 list of richest Americans. He is a regular in the media and has appeared in most major American finance or business periodicals. Fisher also recently authored the New York Times bestseller The Only Three Questions That Count, also published by Wiley.
Loading...
or support indie stores by buying on