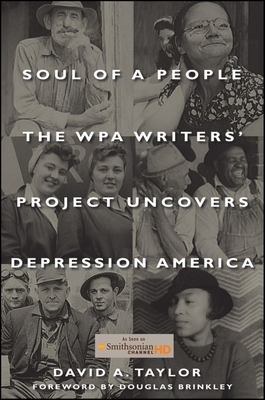 Soul of a People

Soul of a People is about a handful of people who were on the Federal Writer's Project in the 1930s and a glimpse of America at a turning point. This particular handful of characters went from poverty to great things later, and included John Cheever, Ralph Ellison, Zora Neale Hurston, Richard Wright, and Studs Terkel. In the 1930s they were all caught up in an effort to describe America in a series of WPA guides. Through striking images and firsthand accounts, the book reveals their experiences and the most vivid excerpts from selected guides and interviews: Harlem schoolchildren, truckers, Chicago fishmongers, Cuban cigar makers, a Florida midwife, Nebraskan meatpackers, and blind musicians. Drawing on new discoveries from personal collections, archives, and recent biographies, a new picture has emerged in the last decade of how the participants' individual dramas intersected with the larger picture of their subjects. This book illuminates what it felt like to live that experience, how going from joblessness to reporting on their own communities affected artists with varied visions, as well as what feelings such a passage involved: shame humiliation, anger, excitement, nostalgia, and adventure. Also revealed is how the WPA writers anticipated, and perhaps paved the way for, the political movements of the following decades, including the Civil Rights movement, the Women's Right movement, and the Native American rights movement.

David A. Taylor wrote the article for "Smithsonian" that is the basis for this book and the Smithsonian/Channel HD special of the same title. He writes for the "Washington Post," the "Village Voice," and other publications, as well as scripts for television documentaries. His work has aired on the Discovery Channel, The Learning Channel, and elsewhere. He is the author of the award-winning book "Ginseng: The Divine Root" and a book of fiction, "Success: Stories." Visit www.davidataylor.com.
Loading...
or support indie stores by buying on