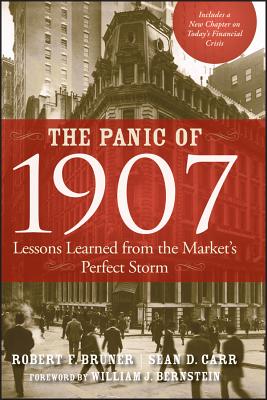 Before reading The Panic of 1907, the year 1907 seemed like a long time ago and a different world. The authors, however, bring this story alive in a fast-moving book, and the reader sees how events of that time are very relevant for today's financial world. In spite of all of our advances, including a stronger monetary system and modern tools for managing risk, Bruner and Carr help us understand that we are not immune to a future crisis.
--Dwight B. Crane, Baker Foundation Professor, Harvard Business School

Bruner and Carr provide a thorough, masterly, and highly readable account of the 1907 crisis and its management by the great private banker J. P. Morgan. Congress heeded the lessons of 1907, launching the Federal Reserve System in 1913 to prevent banking panics and foster financial stability. We still have financial problems. But because of 1907 and Morgan, a century later we have a respected central bank as well as greater confidence in our money and our banks than our great-grandparents had in theirs.
--Richard Sylla, Henry Kaufman Professor of the History of Financial Institutions and Markets, and Professor of Economics, Stern School of Business, New York University

A fascinating portrayal of the events and personalities of the crisis and panic of 1907. Lessons learned and parallels to the present have great relevance. Crises and panics are as much a part of our future as our past.
--John Strangfeld, Vice Chairman, Prudential Financial

Who would have thought that a hundred years after the Panic of 1907 so much remained to be written about it? Bruner and Carr break significant new ground because they are willing to do the heavy lifting of combing through massive archival material to identify and weave together important facts. Their book will be of interest not only to banking theorists and financial historians, but also to business school and economics students, for its rare ability to teach so clearly why and how a panic unfolds.
--Charles Calomiris, Henry Kaufman Professor of Financial Institutions, Columbia University, Graduate School of Business

ROBERT F. BRUNER is the Dean of the Darden Graduate School of Business Administration and Charles C. Abbott Professor of Business Administration at the University of Virginia. He is the author or coauthor of more than 400 case studies and notes as well as the author of two other Wiley titles, Applied Mergers and Acquisitions and Deals from Hell. Bruner has served as a consultant to over twenty corporations and the U.S. government and, prior to his academic career, worked as a commercial banker and venture capitalist. He holds a BA from Yale University, and an MBA and DBA from Harvard University. SEAN D. CARR is the Director of Corporate Innovation Programs at the Darden School's Batten Institute, University of Virginia. Previously, Carr spent a decade as a journalist, having served as a producer for both CNN and ABC News's World News Tonight with Peter Jennings.
Loading...
or support indie stores by buying on