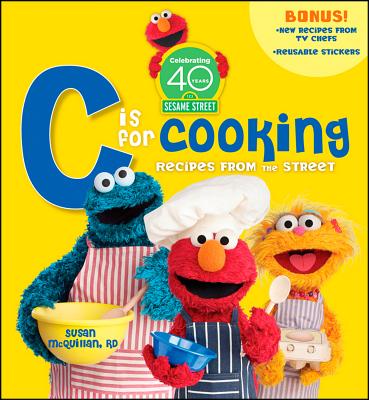 Introducing your kids to cooking is easy-with a little help from the Sesame Street gang. This special anniversary edition of Sesame Street's classic "C" is for Cooking is packed with tasty recipes from Elmo, Cookie Monster, Abby Cadabby, and friends, plus brand-new recipes from celebrity chefs to celebrate forty years of fun on the Street.

With recipes for drinks, breakfasts, lunches, soups, dinners, side dishes, and sweets and treats, Sesame Street "C" is for Cooking is sure to be a hit with adults and kids.

SUSAN MCQUILLAN is a nutritionist and food writer who has written extensively about healthy eating. She has contributed many articles and recipes to magazines such as Woman's Day, Family Circle, American Healthy, Prevention, and Cooking Light.

In March 2014, First Lady Michelle Obama announced a collaboration of Sesame Workshop, Produce Marketing Association (PMA), and the Partnership for a Healtheir America (PHA) in a two-year agreement to help promote fresh fruit and vegetable consumption to kids.