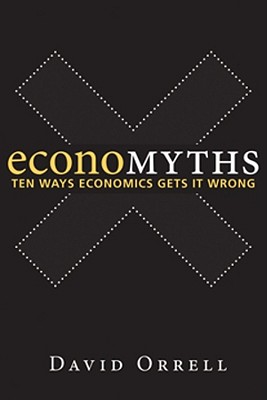 Ten Ways Economics Gets It Wrong

From the inability of wealth to make us happier, to our catastrophic blindness to the credit crunch, Economyths reveals ten ways in which economics has failed us all.

Forecasters predicted a prosperous year in 2008 for financial markets - in one influential survey the average prediction was for an eleven percent gain. But by the end of the year, the Standard and Poor's 500 index - a key economic barometer - was down 38 percent, and major economies were plunging into recession. Even the Queen asked - "Why did no one see it coming?"

An even bigger casualty was the credibility of economics, which for decades has claimed that the economy is a rational, stable, efficient machine, governed by well-understood laws.

Mathematician David Orrell traces the history of this idea from its roots in ancient Greece to the financial centres of London and New York, shows how it is mistaken, and proposes new alternatives. Economyths explains how the economy is the result of complex and unpredictable processes; how risk models go astray; why the economy is not rational or fair; why no woman has ever won the Nobel Prize for economics; why financial crashes are less Black Swans than part of the landscape; and finally, how new ideas in mathematics, psychology, and environmentalism are helping to reinvent economics.

David Orrell is an applied mathematician and author of popular science books. He studies mathematics at the University of Alberta, and obtained his Ph.D. from Oxford University on the prediction of nonlinear systems. His work in applied mathematics and complex systems research has since led him to diverse areas such as weather forecasting, economics, and cancer biology. His books Apollo's Arrow: The Science of Prediction and the Future of Everything (published in the US as The Future of Everything: The Science of Prediction), and The Other Side of the Coin: The Emerging Vision of Economics and Our Place in The World, have appeared on local and national bestseller lists in Canada. He has also published scientific research papers for peer-reviewed journals on topics ranging from systems biology (in Nature Genetics) to systems economics (International Journal of Forecasting). Orrell has been a guest on national shows including Coast to Coast AM, NPR, BBC radio, and CBC TV, and his work has been featured in print media such as New Scientist, World Finance, Adbuster, and the Financial Times. He lives in Oxford, England, with his wife and daughter. Keep up with David online at www.davidorrel.com and www.facebook.com/economyths
Loading...
or
Not Currently Available for Direct Purchase