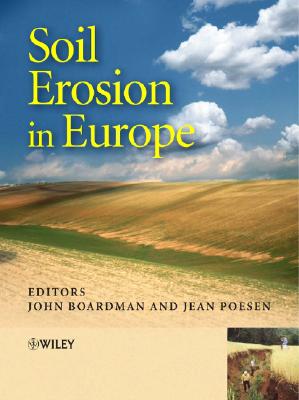 Provides a unique and comprehensive assessment of soil erosion throughout Europe, an important aspect to control and manage if landscapes are to be sustained for the future.

Dr John Boardman, is a geomorphologist educated at the Universities of Keele (BA and DSc) and London (BSc and PhD). He is Deputy Director of the ECI and Director of the MSc 'Environmental Change and Management' and also a Research Fellow at Green College. He has published over 100 papers mainly on land degradation and has edited several books. He was Chairman of the EU-funded COST Action 623 'Soil Erosion and Global Change' (1998-2003) with 21 participating countries and now Chairs a Working Group in COST 634 'On and Off-Site Impacts of Runoff and Erosion'. His main research interest is in land degradation in South Africa. Professor Jean Poesen, Professor of Physical Geography, K. U. Leuven, Belgium and his research interests include: Physical geography; Geomorphology; Soil erosion; Soil degradation; Sediment yield; Hillslope hydrology; Desertification processes and mitigation techniques; Soil erosion control; Soil and water conservation and experimental geomorphology (rainfall and runoff simulation).
or
Not Currently Available for Direct Purchase
Copyright © 2020 American Booksellers Association