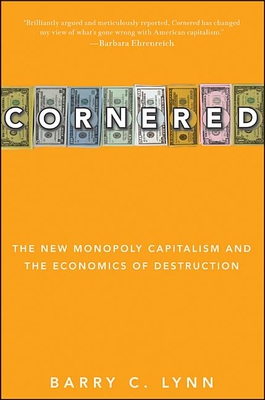 The New Monopoly Capitalism and the Economics of Destruction

A manifesto for our times.
--Thomas Frank, Wall Street Journal

Barry C. Lynn, one of the most original and surprising students of the American economy, paints a genuinely alarming picture: most of our public debates about globalization, competitiveness, creative destruction, and risky finance are nothing more than a cover for the widespread consolidation of power in nearly every imaginable sector of the American economy.

Cornered strips the camouflage from the secret world of twenty-first-century monopolies-neofeudalist empires whose sheer size, vast resources, and immense political power enable the people who control to direct virtually every major industry in America in an increasingly authoritarian manner. Lynn reveals how these massive juggernauts, which would have been illegal just thirty years ago, came into being, how they have destroyed or devoured their competition, and how they collude with one another to maintain their power and create the illusion of open, competitive markets.

A confluence of small government zealotry and misguided efficient market theories has lead to a complete dismantling of government oversight of industry. Has that brought us the promised economic utopia? Just the opposite. For decades, the dominant elite has used the federal government to all but encourage companies to buy one another up, outsource all their production, and make their profits by leveraging their complete power over the market itself. Lynn makes clear it will take more than a lawsuit or two to overthrow America's corporatist oligarchy and restore a model of capitalism that protects our rights as property holders and citizens, and the independence of our Republic.

Lynn is that rarest of creatures, a journalist whose theoretical writings are taken very seriously by the top policymakers and economic thinkers in Washington and around the world. His work has been compared already to John Kenneth Galbraith and Peter Drucker. The Washington Post called Lynn's last book-on globalization-Tom Friedman for grownups. Cornered is essential reading for anyone who cares about America and its future.