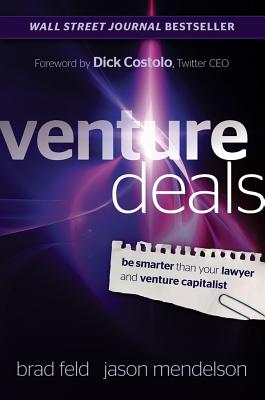 An engaging guide to excelling in today's venture capital arena

Beginning in 2005, Brad Feld and Jason Mendelson, managing directors at Foundry Group, wrote a long series of blog posts describing all the parts of a typical venture capital Term Sheet: a document which outlines key financial and other terms of a proposed investment. Since this time, they've seen the series used as the basis for a number of college courses, and have been thanked by thousands of people who have used the information to gain a better understanding of the venture capital field.

Drawn from the past work Feld and Mendelson have written about in their blog and augmented with newer material, Venture Capital Financings puts this discipline in perspective and lays out the strategies that allow entrepreneurs to excel in their start-up companies. Page by page, this book discusses all facets of the venture capital fundraising process. Along the way, Feld and Mendelson touch on everything from how valuations are set to what externalities venture capitalists face that factor into entrepreneurs' businesses.

The venture capital arena is a complex and competitive place, but with this book as your guide, you'll discover what it takes to make your way through it.

Brad Feld has been an early-stage investorand entrepreneur for over twenty years. Prior tocofounding Foundry Group--a Boulder, Colorado--based early-stage venture capital fund that invests in information technology companies all over the United States--he cofounded Mobius Venture Capital and, prior to that, founded Intensity Ventures, a company that helped launch and operate software companies and later became a venture affiliate ofthe predecessor to Mobius Venture Capital. Jason Mendelson has over a decade ofexperience in the venture capital and technologyindustries in a multitude of investing, operational, and engineering roles. Prior to cofounding FoundryGroup, he was a managing director and general counsel for Mobius Venture Capital, where he also acted as its chief administrative partner overseeingall operations of the firm. Mendelson was also an attorney with Cooley LLP, where he practiced corporate and securities law with an emphasis on representation of emerging companies in private and public financings as well as mergers and acquisitions.
Loading...
or
Not Currently Available for Direct Purchase