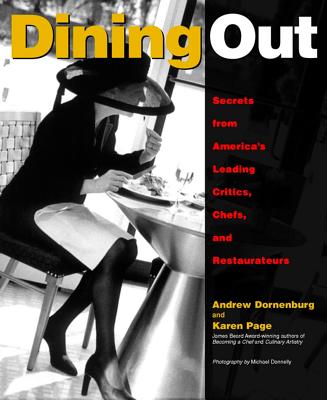 This book is the first of its kind to examine what defines fine food in America and it introduces us to many individuals who shape our views about food. Using other successful Dornenburg/Page books as a model, the authors once again base their analysis on interviews with chefs, restaurateurs and critics. This insider's guide to the process of restaurant reviewing will excite anyone with a serious interest in food. It also features top sites on the Internet that provide restaurant reviews. 'If I were a restaurateur, I would expect all my staff to read this book. As a restaurant critic, I found it a fascinating insight into the minds of other critics and more especially the minds of some of the people who are serious about running a restaurant.'

KAREN PAGE is the coauthor of a groundbreaking series of books chronicling America's vibrant restaurant culture, including the James Beard Award-winning Becoming a Chef. She is the recipient of the 1997 Melitta Bentz Award for Women's Achievement, and a graduate of the Harvard Business School (whose alumnae network she heads) and Northwestern University, which named her to The Council of 100 leading alumnae.

ANDREW DORNENBURG is the coauthor of a groundbreaking series of books chronicling America's vibrant restaurant culture, including the James Beard Award-winning Becoming a Chef. Dornenburg has cooked professionally in some of the best restaurants on the East Coast, including Arcadia, JUdson Grill, and March in New York City, and Biba and the East Coast Grill in Boston. He attended the School for American Chefs, where he studied with Madeleine Kamman.

MICHAEL DONNELLY is a New York-based photographer whose work has appeared in Elle, House & Garden, Travel & Leisure, and the World of Interiors.

FIONA DONNELLY is a feature writer, fashion stylist, and contributing editor at Bride's.
Loading...
or
Not Currently Available for Direct Purchase