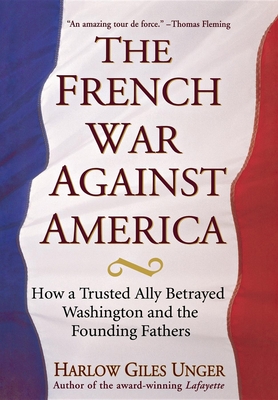 The French War Against America

How a Trusted Ally Betrayed Washington and the Founding Fathers

By the end of 1798, France--"our oldest ally"--had captured or sunk more than eight hundred American ships, and President John Adams called George Washington out of retirement to command the defense of the nation's shores against imminent French invasion. The French war against America had reached its climax. After thirty-five years of feigning friendship for America, France at last revealed her real motive for supporting the American Revolution--and it had nothing to do with liberty. In The French War Against America, award-winning author and historian Harlow Giles Unger shatters the myth of France as our oldest ally and reveals her as our oldest enemy. Citing hundreds of secret and not-so-secret personal and official documents and letters from French, American, and British sources, Unger lays bare a chapter of American history ignored by many historians: the long and treacherous French plot to recapture North America.Contrary to popular belief, the French Army came to fight in America's Revolutionary War not to save America but to conquer her. By infiltrating the Continental Army high command, French officers hoped to replace Washington and establish a French military dictatorship. By war's end, French agents had infiltrated every area of American life, developing close relationships with top American officials, working their way to the highest levels of the American military, and bribing cabinet members to obtain secret documents--all to try to turn the young nation into a French vassal state. From the beginning of the war, however, a small group of courageous Founding Fathers had remained suspicious of French motives. This action-packed history follows them--Washington, Adams, John Jay, and others--as they outwit every overt and covert French plot to destroy the United States.A decade after the American Revolution, French government agents tried to overthrow President Washington by provoking widespread street rioting, while French warships occupied the harbors of major cities. Again, the Founding Fathers outwitted the French. Furious at their nation's humiliation, the French Navy began sinking American ships to crush American foreign trade. John Adams ordered construction of an American Navy that destroyed the French fleet. Undeterred, the French continued to plot to reconquer North America into the next century. Napoleon I prepared to send 20,000 troops to invade Louisiana in 1802, and his nephew Napoleon III sent 40,000 troops to conquer Mexico in 1863, with orders to march northward into the United States.To this day, "our oldest ally" often seems still at war with America--metaphorically and diplomatically, if not militarily. The French War Against America provides new perspectives on the origins of that war and explains why it may never end. An important addition to Franco-American history, it adds new insights into current diplomatic relationships. It is also an exciting, action-filled drama of remarkable human courage.

HARLOW GILES UNGER is author of the award-winning Lafayette, John Hancock, and Noah Webster, all from Wiley. A veteran journalist, he was an editor at the New York Herald Tribune Overseas News Service and a foreign correspondent for the Times and the Sunday Times (London). After many years in Paris, he now lives in the United States.
Loading...
or
Not Currently Available for Direct Purchase