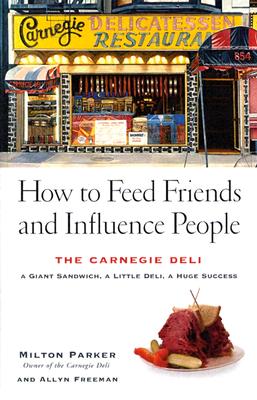 How to Feed Friends and Influence People

Full of insightful wisdom, hilarious anecdotes, and tasty recipes, How to Feed Friends and Influence People tells the savory story of the Carnegie Deli, home of the world-famous gargantuan sandwich. Revealing the core business principles that have made the deli such a success, the book explains why and how the Carnegie became the delicatessen of choice for presidents, celebrities, at least one sultan, and millions of other (extremely) hungry diners from around the world. More than just a delightful and delicious tale of business success, this fascinating and funny book covers the deli's history, shows you how to make a real Brooklyn egg cream, and piles up loads of New York history. So get cooking.

MILTON PARKER was born in Brooklyn, New York, in 1919. He cofounded the Carnegie Deli with Leo Steiner in 1978 and became sole owner in 1988. ALLYN FREEMAN is a writer whose credits include television episodes of M*A*S*H and Hart to Hart. He holds an MBA from Columbia University Business School.
or
Not Currently Available for Direct Purchase