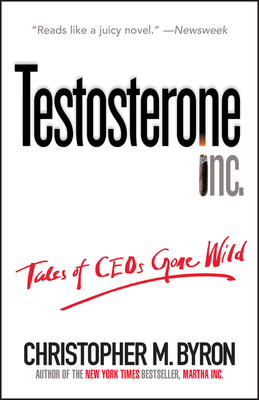 In Testosterone Inc.: Tales of CEOs Gone Wild, bestselling author and New York Post columnist Chris Byron chronicles the Gatsby-like saga of the rise and fall of the celebrity CEO. During the height of the 1990s bull market, they were America's new heroes: the heroes of business. They were our bold new leaders, cutting the fat, pushing for productivity, implementing visionary plans, and making strategic deals.

When the bull market turned to bust and the applause turned to cat-calls, the world was shocked at the truth. Drenched in money and public acclaim, our CEO-heroes--mostly white, mostly male, mostly middle-aged--turned out to be not much different than a group of twenty-something rock stars--drunk on power and driven by sex, greed, and glamour.

Testosterone Inc. goes behind the boardroom doors to show the serial affairs and marriages of these acquisitive corporate titans. At the center of this story is Jack Welch, the biggest of America's rock star CEOs and the former head of General Electric Co., surrounded by "mini-me" CEOs Ron Perelman of Revlon, Al Dunlap of Sunbeam, and Dennis Kozlowski of Tyco--all gone wild in public displays of consumption and predatory appetites writ large.

Byron gets inside the bars where Welch liked to hang out and pick up women with his early "business soul mate" buddies. Byron hovers unseen at the elbow of Ron Perelman and his mistress aboard the Concorde for a week in Paris in his mistaken belief that his wife knows nothing about his secret affair. Byron peeks behind the curtains of a U.S. Army officers' quarters to behold Al Dunlap horrifying his first wife, who claimed in her divorce action that Dunlap would point his knife at her and say, "I often wondered what human flesh tasted like." Byron becomes a fly on the wall to chronicle the longing for respect and serial womanizing of Dennis Kozlowski.

Frequently hilarious, sometimes heartbreaking, Testosterone Inc. follows the intertwined lives of these four corporate heroes, from childhood to their ultimate moments of glory and the crash-and-burn calamities that followed, as man's age-old hunger for power, greed, and temptation undid them all. From suicide to murder, from dysfunctional childhoods to dysfunctional marriages in adulthood, from business chutzpah to financial suicide, here is the ultimate untold business story of our time: what went on at century's end, when testosterone got the best of businessmen everywhere, and CEOs went wild.

CHRISTOPHER M. BYRON has been writing about business and finance for over thirty years. He is author of the international and New York Times bestseller, Martha Inc., writes a weekly business column for the New York Post, and is host of a syndicated daily radio show, Wall Street Wake Up with Chris Byron. He is an analyst on Good Morning America, and appears frequently on CNBC, FOX News Network, MSNBC, and CBS Evening News, among other venues. His articles have appeared in Esquire, Playboy, New York, Worth, Men's Health, and Travel Holiday magazines. Byron graduated from Yale College and the Columbia University School of Law. He is a veteran of the U.S. Navy and lives in Connecticut with his family.
or support indie stores by buying on